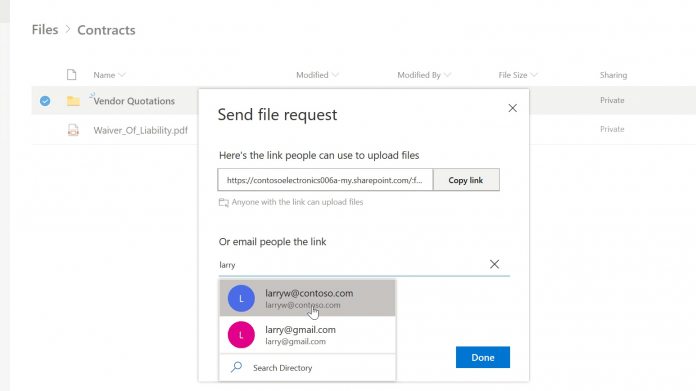 Microsoft has listed its November 2019 roadmap for OneDrive, with a few business-focused improvements. Among them is the ability to ask colleagues to upload a specific file to a folder.

Known inventively as ‘Request Files’, it lets anyone with the link upload files, even if they don’t have an account. The uploaders cant view, edit or see other’s files, which makes it perfect if you are looking for multiple submissions.

Microsoft gives examples of teachers collecting assignments, managers asking for feedback, or bid collection. This could also be useful for holiday photo albums, but the features appear to be restricted to OneDrive for Business for now.

Another new business feature consumers could benefit from is a new ‘Save for Later’ button. As you’d expect, this works as a bookmark and a separate section in the menu lets you look through later. You can save files from both your own library and shared ones, which is very useful.

Microsoft says these features landed in production in November, alongside language localization for OneDrive emails. From now on, emails will be localized to whatever language recipients have in their AAD and Exchange settings.

“In the case of multi-recipient emails the built-in logic will consume content and site languages to localize emails,” explains Ankita Kirti, product management and marketing.

Unfortunately, there was no mention of whether these features would roll out to OneDrive Personal users. However, Microsoft 365 business features have come to consumers before, so it isn’t completely out of the question.