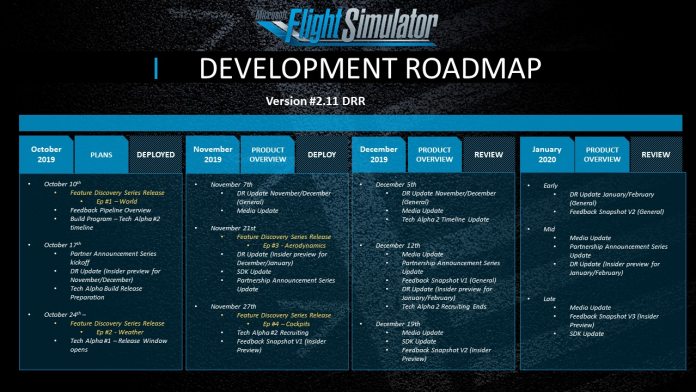 Microsoft has been busy preparing for the full release of Microsoft Flight Simulator, including releasing the Tech Alpha in October. Furthermore, at XO19 last month, the company detailed which aircraft companies it has worked with while developing the game.

Among the details offered was a potential partnership that it now seems will be announced soon. Also, in a list of the newest updates, Microsoft details its development roadmap.

As you can see in the image below, plane manufacturer Cub Crafters are a new official partner for Flight Simulator. Microsoft has yet to confirm this, but an announcement is expected this week.

Microsoft’s roadmap also reveals recruitment for Tech Alpha 2 is coming to an end. The company says any people who are interested in registering for the preview must do so ASAP. According to the roadmap, this recruitment phase will close on December 12.

Users must be a member of the Microsoft Flight Simulator Insider Program to get the Tech Alpha 2. It is also worth noting this is just an application process. Microsoft will select users it deems worthy to test the game.

“Right after the E3 trailer came out there was a lot of people making that exact assumption, that ‘Oh yeah, this better be supporting VR right from the get go.’ It honestly wasn’t our plan. But we are listening, and we heard it, so we will try our darnedest to make it happen. Whether or not we’re going to pull it off for launch, we can’t commit to that at this point in time, but we are aware of the desire […] We will try to prioritize that over other things.”