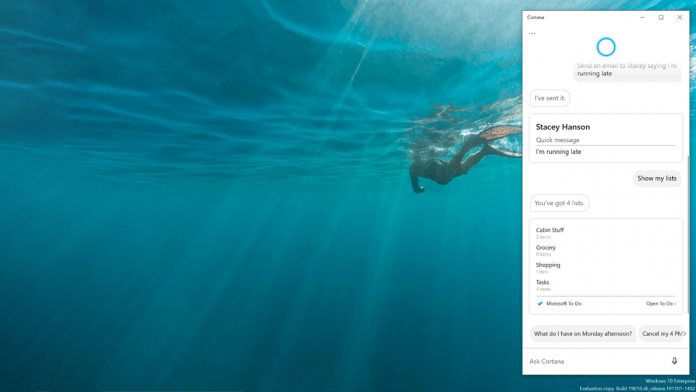 The Cortana beta app for Windows 10 has received an update that makes the assistant more serious. Windows Insiders on the Fast ring will notice that Microsoft has removed several features.

The team has temporarily cut jokes, Bing Instant Answers, assistant conversations, and timers. At the same time, it has added several new productivity skills that should be better suited to enterprises and students.

“While we’re honing our productivity skills, we’re temporarily removing a few Cortana skills that were previously released to Windows Insiders,” explained the Windows Insider Team in a blog post. “But don’t worry, we’re giving them a fresh coat of paint, and they’ll be coming back soon!”

Also gone from the app is Cortana support for ‘connect accounts’. As a result, work and personal accounts will now be two separate experiences. This could be a good or bad thing depending on how close your work and home life overlap.

As mentioned, the removals are made less harsh by the introduction of several new features. These cover email, calendar, Windows, and general functionality. Here are the full notes:

As is typical, the new Cortana app is currently exclusive to U.S. users, but it should be coming to more languages and regions soon.