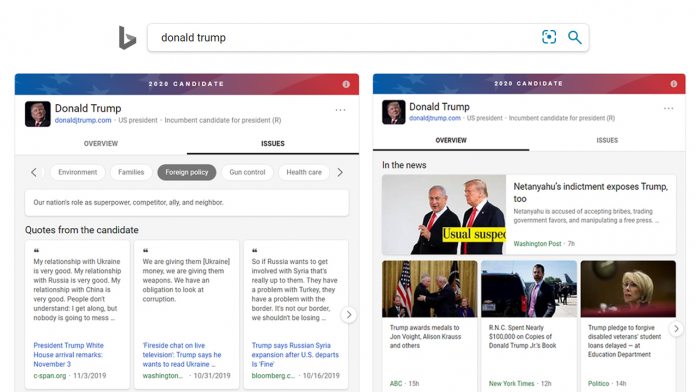 Microsoft has announced a new election experience for Bing that aims to deliver key information quickly. It will show details about candidates and key issues, with some data pulled from non-partisan partner VoteSmart.

It’s a clear effort from the company to simplifying the decision-making process. Users can quickly view each candidate’s stance on various issues through a simple filter system. They can also see how they’ve voted on various pieces of legislation.

“Our goal is to provide a comprehensive view with the most relevant, accurate and timely information,” said Microsoft in a blog post. “This includes a holistic overview and introduction to key issues, with a range of news sources and opinions, and key legislation that impacts the issues.”

However, though Bing’s voting information is non-partisan, its news isn’t. Articles are pulled from a variety of sources, including Fox News, the New York Times, and The Guardian. The fact it shows them all in the same place should, at least, lead to exposure of differing viewpoints.

The election experience is currently in beta for use in the US election. You must have your search region set to the United States for it to appear. However, Microsoft is looking at expanding the feature to other regions in the future after user feedback. The UK has an election in just a few weeks, so that would be a natural target.

Interestingly, Google doesn’t seem to have a similar election experience. However, it did announce a ban on election ads that use public voter records and political affiliation. It’s possible the search giant will announce its own experience in good time, with a while to go until voting day yet.