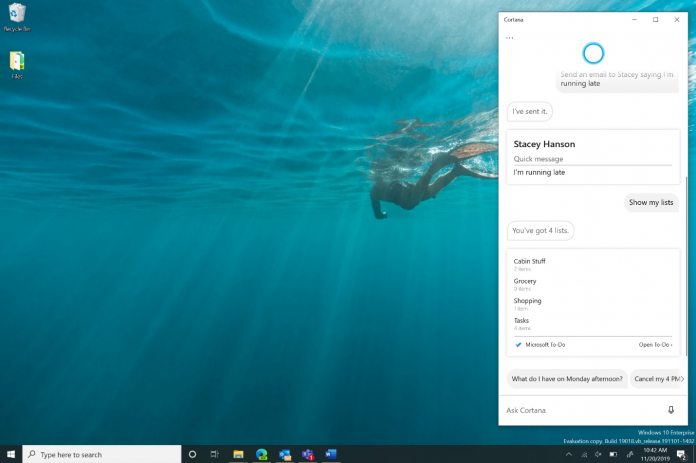 Microsoft is this week updating its new Cortana application on Windows 10 hardware. Some changes have been added to the app, although at the moment the update is in preview. This means the release is available for Windows Insider Program members on the Fast Ring.

With the new Cortana update, the app has a few new features. First among them is that Cortana is now undocked from the taskbar. Essentially, this allows the app to behave like any other. Users can move and resize the application.

Elsewhere in the update, Cortana is continuing to move away from consumer-fronted to the “personal productivity” tool Microsoft has promised. Among the new skills available are the ability to create meetings, query meetings, and join meetings through voice on Microsoft Teams. Users can also send emails on the service.

While the new Cortana update adds new features, it has also removed the following tools:

The new Cortana provides a chat-based UI. Users can type or speak in natural language and receive replies from the assistant. The app also fits with the Windows 10 aesthetic by supporting both the dark and light themes.

One of the key differences with the Cortana app is it no longer tied to Windows 10 updates. Microsoft now updates the service through the Microsoft Store. This means Insider updates move more quickly to end users, who don’t have to wait until major Windows releases to get new Cortana features.