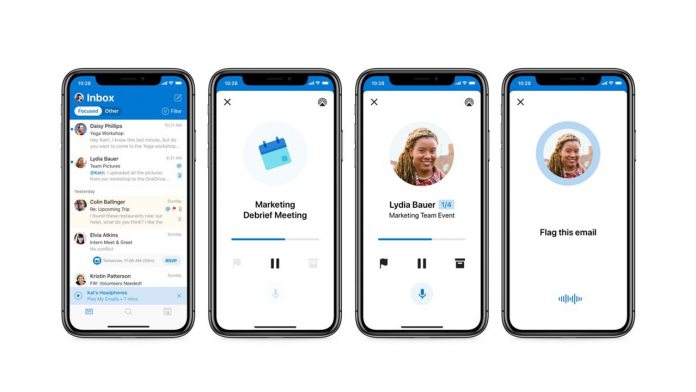 Microsoft is beginning to showcase what the future of Cortana will look like via integration with its Outlook for iOS app. As of today, you can ask the digital assistant to read your unread mail, with input for archiving, flagging, and pausing the readout. Though this information was leaked previously, we now have official confirmation.

Due to integration with Microsoft Graph, Cortana’s reading will also be more human. It won’t robotically read out every line of text, instead skipping things like headers and footers and utilizing knowledge about user’s documents, contacts, and calendars.

“With an intelligent read out of your emails, natural language interaction with Cortana and a user interface designed for people on the move, you can stay organized, on top of what matters and get back to living life outside your inbox,” said Microsoft’s Eugenie Burrage in a blog post.

Interestingly, Microsoft is using this an opportunity to move away from the idea of Cortana as the female Halo avatar. Play My Emails will have a masculine voice option to suit users’ preferences. As the company signaled previously, the future of Cortana will be as an occasional aide in its existing apps, rather than a warm, multi-skilled assistant.

Alongside the voice readout is the new Play My Emails interface, which offers supporting information at a glance. The sender’s profile picture is front and center, and you can swipe with one finger to act on a message or skip.

The general idea is to keep your hands free and your eyes away from your phone so your workflow isn’t interrupted. Play my Emails feature won’t roll out to Android until 2020, though, and as is often the case with Cortana, it’s US only for now.