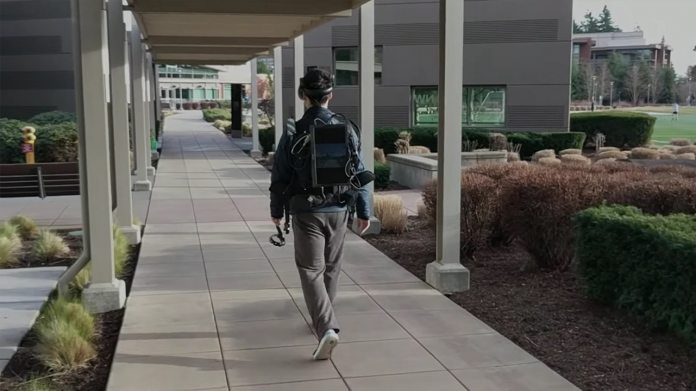 Microsoft Research has developed a concept that lets virtual reality users safely navigate the outside world with a headset on. Called DreamWalker, it replaces the real world with a virtual one of the same route, but dramatically different surroundings.

Essentially, it could let you replace the monotony of your walk to work with a different one each day. All the while, it’ll be using real-time environment detecting to ensure the user doesn’t collide with people or objects.

These collision adjustments can take the form of immersive objects, and make use of two RGB depth cameras and eye-tracking. Naturally, these are paired with a GPS system to accurately detect where the user is in the real world.

In the current world, Microsoft’s idea doesn’t have much practical use. There’s little reason for someone to replace their route with a virtual one, especially given the low fidelity of assets and drawbacks like bulky devices and motion sickness.

However, DreamWalker is designed not for the present, but for a world where VR is much more commonplace. The company somewhat depressingly predicts a world “in which people spend considerably more time in virtual reality, even during moments when they walk between locations in the real world”.

That hasn’t stopped reseachers Eyal Ofek, Andy Wilson, and Christian Holz from testing it on willing participants, though. The trials walked 8 participants for 15-minutes across campus, replacing it with a virtual Manhattan.

Even if the near-dystopian vision of a VR future doesn’t take off, the research done may be useful for other use cases. As part of the project, researchers created a new haptic feedback controller that “uniquely emulates the human sense of touch by meshing centuries-old and cutting-edge technologies”.

You can read more about DreamWalker on the Microsoft blog.