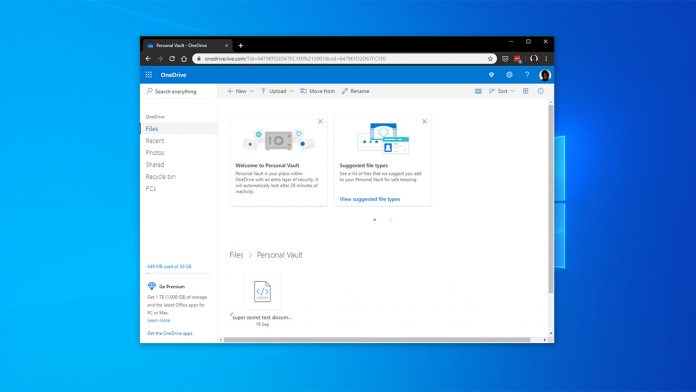 Microsoft’s OneDrive Personal Vault is rolling out across the globe after a testing period. The feature, which was first announced in June, adds another layer of protection to existing cloud storage.

Much like a safe inside a house, the vault requires additional authentication methods to access. Users can enable a fingerprint, PIN, SMS code or mobile authenticator to make sure their most important documents are protected even if their account is compromised.

Examples Microsoft gives are photocopies of passwords and IDs and tax records. These are files that it would be nice to be able to access from anywhere but have previously been deemed too risky to store in the cloud.

The Personal Vault locks itself after 20 minutes of inactivity, and users of OneDrive on Windows 10 will find the files are synced to a BitLocker encrypted area of their PC.

However, while the feature adds an additional layer of security, users shouldn’t see it as a catchall. After all, the data is still stored on Microsoft’s servers and may be subject to law enforcement requests as a result. The best bet for truly sensitive cases is likely a solution like Boxcryptr, which end-to-end encrypts your cloud files.

Whatever the case, users on OneDrive’s free or standalone 100GB plan can store up to three files in the vault. Those with an Office 365 Home or Personal subscription can store as many as they like.

Alongside the announcement, Microsoft announced the ability to more easily backup folders on your PC. Via the desktop app, users can automatically backup files in the desktop, documents, or pictures folder to protect against data loss. It inventively calls this feature ‘PC folder backup’.