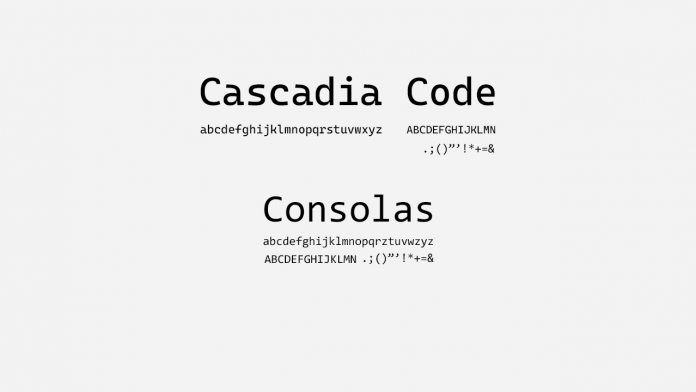 Microsoft has released a programming-focused font called Cascadia Code. Developed during the creation of Windows Terminal, it’s designed to be open source and easily readable.

Essentially, it’s an alternative to Lucas DeGroot’s Consolas, which has been part of Microsoft’s ClearType collection since Windows 7, or Courier New. It comes with programming ligatures, meaning you can combine characters like /=, >=, and more.

“The name Cascadia Code originated from the Windows Terminal project. Before it was released, the codename for Windows Terminal was Cascadia,” explains Microsoft’s Kayla Cinnamon. “In fact, some of the source files within the Terminal still use this name! As an homage to the Terminal, we liked the idea of naming the font after its codename.”

The font was first announced at Build 2019, and Microsoft is recommending it for Windows Terminal, Visual Studio, and Visual Studio Code. It’s quite bold in comparison to some of its competitors and generally has a little more character.

Unfortunately, this early version has a few features missing. It doesn’t support letters with accents, for example, nor bold, italics, and bolded italics. While this isn’t a massive deal, it could be useful for comments. Microsoft has signaled plans to update the font, following Windows versioning schemes, so they’ll probably come at some point.

However, it also has to fight several established alternatives. Adobe’s Source Code Pro is one free competitor, as well as Fira Code. Either way, it’s likely to become the default font for Microsoft’s coding-related products in the future, so you should probably get used to it.