A group of employees has made their opinions clear following a partnership between Microsoft, Chevron, and Schlumberger. The collaboration, which seeks to “accelerate the creation of innovative petrotechnical and digital technologies,” was announced three days before the Global Climate Strike.

“Microsoft makes millions of dollars in profits by helping fossil fuel companies extract more oil,” says an open letter on GitHub. “In this week’s company-wide all-hands, our CEO, Satya Nadella, defended our contracts with Big Oil by suggesting that our technology helps them in their R&D efforts to develop sustainable energy. Yet, this is in clear contradiction to the ambitions of fossil fuel-CEOs and even other Microsoft leaders.”

It’s an argument we’ve seen several times over the years. The use of AI and digital technologies can, even in fossil fuel extraction, aid the climate. Increasing efficiency in the production line can reduce CO2 emissions, while upgraded sensor tech can help prevent large-scale oil spills.

However, the long-term question is a more pertinent one. By providing these technologies to oil companies, is Microsoft enabling their long-term exploitation of damaging resources?

Well, Chevron argues that even in the most aggressive non-carbon scenarios, oil and gas will be required during the transition period. It highlights its investments in solar, wind, and geothermal energy, previously claiming to be the world’s largest geothermal producer. It’s also been burying carbon dioxide in Australia to reduce its emissions.

In 2014, though, Chevron raised eyebrows. It sold its renewable energy unit to OpTerra Energy Services in 2014 just months after it sold a Defense Department-focused energy-saving division.

When it comes to climate change, it’s clear the company is still far from an activist. As of its latest report, it produces 2.9 million barrels of oil per day. By 2033, the company wants to reduce its methane emissions by 20-25%, and its flaring intensity by 25-30%. It doesn’t appear to have made any commitments to zero emissions.

Microsoft employees highlight their company’s participation in the Climate Leadership Council. The organization, which includes Shell and Exxon Mobil advocates for more carbon taxes as a replacement for other climate legislation. Its attendance at the oil and gas conference is also seen as at odds with its company culture, which advocates for recycling and low emissions on campus.

“The company has taken many initiatives that focus on individual contributions, such as educating employees on composting, reducing waste, and making our campus carbon neutral,” says the letter. “There are also efforts to leverage artificial intelligence to solve specific and important climate-related problems. However, given the urgency and complexity of the crisis, these actions are not enough.”

To meet its motto of “empowering every person and organization on the planet to achieve more”, employees are calling for more radical changes. The letter calls for Microsoft to stop providing ‘Big Oil’ with convenient technology and work towards three goals:

These goals are shared by several groups of tech giant employees, including Amazon and Google. They’ll be joining in the global climate walkout, which will run from today until September 27. 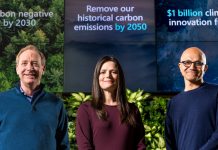