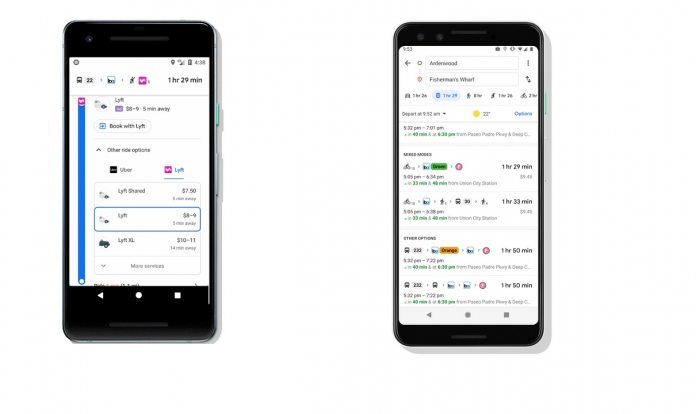 Google Maps has announced an important new feature that expands its capabilities for giving transit directions. In a multimodal approach, the navigation app now combines biking and ridesharing options with traditional transit methods. These transport modes can be combined when getting directions from point A to B.

Specifically geared towards users who need transit information for a commute or other need, the feature is rolling out in stages. Ridesharing support is available on Android and iOS from today. Biking integration will be coming to those same platforms in the coming weeks.

Let’s start with ridesharing. When travelling, many people use companies such as Lyft or Uber to travel short distances. With Google Maps, users can now see options for ridesharing when entering a destination and selecting Directions.

Expanding the capability, Maps will now combine this journey with the rest of your commute. By selecting the transit tab, you will be presented with the cost of the ride, how long the wait is, the state of the traffic on the roads, and what time the connecting train or bus departs.

Google explains how the tool can help those who combine transit modes:

“Say you’re taking the subway home from a friend’s house, but your apartment is a bit too far from the station to get to on foot. Catching a ridesharing vehicle can help you travel that short distance quickly. Or, you’re headed to work at the peak of the busy back-to-school season, so you need to ride your bike to the nearest bus stop to make that important 9 a.m. meeting on time.”

Looking at biking, the integration works in a similar way. Many people use bikes for a portion of a commute, so Google Maps is now a much handier navigation tool. When entering a destination in the search and choosing Directions > transit tab, you can choose bike and see routes that match cycle options with transit directions.

Many cities have designated bike routes, which will be shown on Maps.