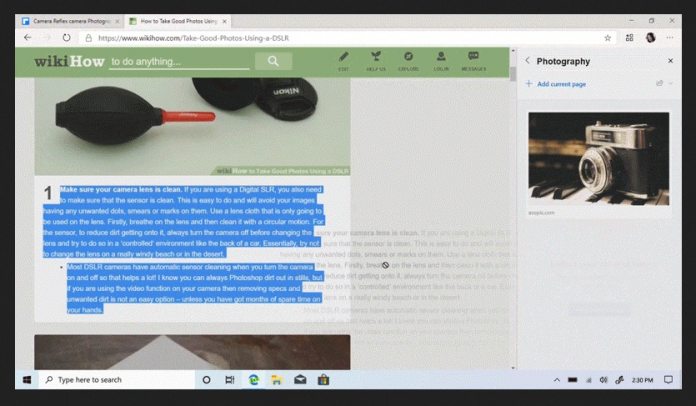 This week has been a busy one for Microsoft’s Chromium Edge browser, which has seen its Beta development channel released. The company is continuing to roll out new features for Edge preview, including the Collections tool that was announced back at Build 2019.

Microsoft has announced Collections are now available on Chromium Edge through the Canary channel. The feature is bundled into build 78.0.250.1 and can be tested by users on the early adopting branch now.

Collections can help users organize and share to help keep track easier. Microsoft many customers say they find the internet and overwhelming place and are often cluttered. With this vast information, Collections helps to organize into actionable tools.

Microsoft says the feature leverages “Cloud featured intelligence and an intuitive interface to help you collect, organize and share content” as you browse content on the web.

Collections provides “intelligent export to apps like Word and Excel preserves the logical structure of your content. You can turn loose paragraphs into a handout with citations, or turn a shopping list into a spreadsheet sortable by price”.

As mentioned, Microsoft this week debuted its beta channel for Chromium Edge. Now that testing channel is available on Windows and Mac, users on those platforms will be receiving Collections in beta release in the coming months.

Since late last month a stable version of Chromium Edge has been leaking online. A new leak was spotted late last week, and the installer works. The leaked installer shows that Microsoft will remove the classic Edge experience from Windows 10 entirely.