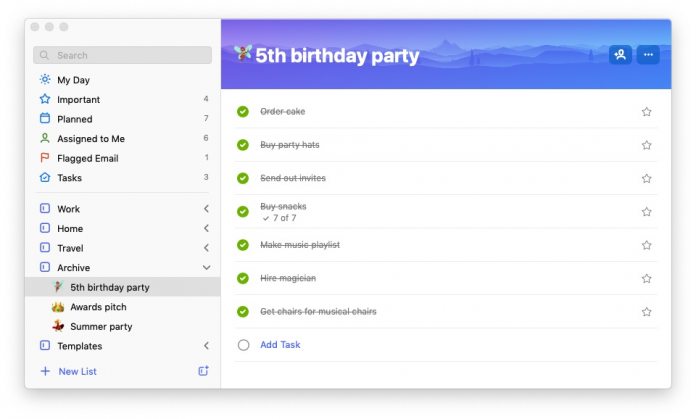 Last month, Microsoft To-Do beta for Android received an update that brought list groups in preview to the service. With the feature, users are able to group similar tasks in a group, making it easier to find tasks. Microsoft has today launched the same feature across all platforms with To-Do support.

By adding support for grouped lists, users can now collect lists and reduce the clutter on the app. Microsoft To-Do uses the feature to help users collect similar tasks within the same group. This makes it easier to find a task opposed to scrolling through numerous separated tasks.

In an announcement blog post, Microsoft says users can use list groups for vacation checklists. Other examples offered by the company include:

“Heading home for the evening? Open up that home list group to get your grocery, movies, or favorite recipes list. List groups will help you get even more stuff done by letting you focus only on those lists you need, when you need them.”

Creating a group is achieved by clicking the icon located next to the New List options. Users can then name the group and start collecting tasks within it.

To get the new feature on Microsoft To-Do, head to the app store on your platform of choice. On Android, the feature has left beta and is available from Play Store here. Apple iPhone and iPad users can check out the app at the App Store here or on the Mac here.

It seems Microsoft is rolling the feature out in stages, so not all users may see the update right now.

Also last month, Microsoft brought task assignments to To-Do across platforms. As the name suggests, task assignments let users assign tasks to other people or even to themselves. It is worth noting that because this is a collaborative feature, it is only available on the Shared Lists area of Microsoft To-Do.

Family members, friends, colleagues, and other contacts can assign tasks to each other through a shared list.