Microsoft is now nearing the end of its current generation of consoles. But as we look ahead to the launch of Xbox Scarlett next year, the Xbox One is heading into the sunset on a high. Triple A titles continue to launch on the console, including Gears 5. To celebrate, Microsoft has launched a special edition Xbox One X console.

Gears 5 is the latest in the hugely popular Gears of War franchise. Microsoft has announced a limited-edition customer Xbox One X with the Omen Gears of War symbol frozen in ice and snow stamped on the front.

There’s no doubt the console looks cool and it is also something of a unique release. It is the first limited edition Xbox One X Microsoft has ever produced.

The company says the console was designed by “The Coalition” team and it available for pre-order today. Gears 5 will launch this month and the $499 limited edition console will arrive before the game lands.

Furthermore, there is also a new Gears 5 Xbox One controller. The gamepad features the same icy design and also textured grips. Microsoft says the controller is available separately and will launch on Aug. 20 for $74.99.

Microsoft has also teamed with partners for Gear 5 themed accessories. Among them is a $49.99 charging stand for the controller. Elsewhere Razer has created a themed mouse and keyboard set that will cost a cool $299.99. Other peripherals include a Gear 5 2TB hard drive built by Seagate. 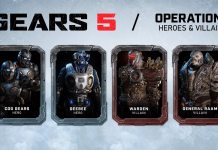