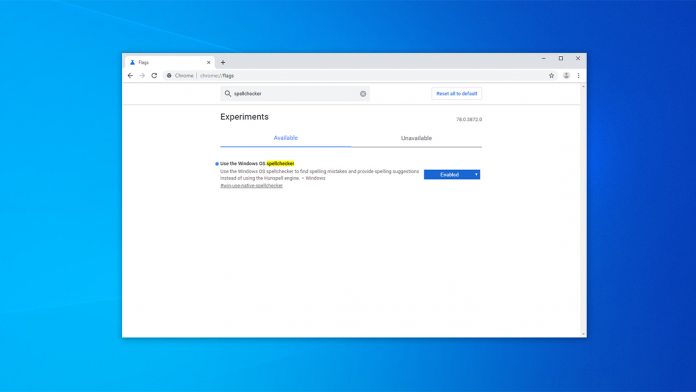 Microsoft and Google’s Chromium collaboration is bearing more fruit. With the development of its new Edge browser, built on the search giant’s engine, the company has been suggesting several new features.

One of those was Windows’ default spell checker, the commit for which was first spotted in early July. It seems the feature is now available in Chrome Canary, albeit via the chrome://flags menu.

Currently, Chrome uses Hunspell, the check used by Libre Office, Open Office, and Firefox, as well as software like Photoshop, and macOS. The plan is to let Chrome users on Windows switch to the native spell checker if they wish, increasing consistency.

“Use the Windows spellchecker to find spelling mistakes and provide spelling suggestions instead of using the Hunspell engine,” reads the setting tooltip.

Which checker users prefer will likely depend on preference. Microsoft is still testing the feature, so it’ll probably take a while for it to make it to mainline Chrome. Interestingly, the flag isn’t in Chromium Edge Canary at the time of writing.

Previously, Microsoft has suggested additions to Chrome that improve memory management, add keyboard text suggestions, fix its scrolling, and more. These kind of collaborations are what Microsoft promised when it ditched its EdgeHTML engine, though it’s not without its downsides.

Though having two major companies and a spattering of smaller ones all working on Chromium is great, it also increases its dominance. Some argue that its important consumers retain choice and that competition breeds innovative thinking.

In this case, however, collaboration between Google and Microsoft could have all kinds of benefits. As well as the divide between OS and browser on Windows, there’s a gap with Google’s Android. This is something Microsoft is trying to address with Your Phone and its mobile Edge browser, which is also based on Chromium.

Regardless of your thoughts, you can test out the Windows Spellchecker via this Chrome Canary build.