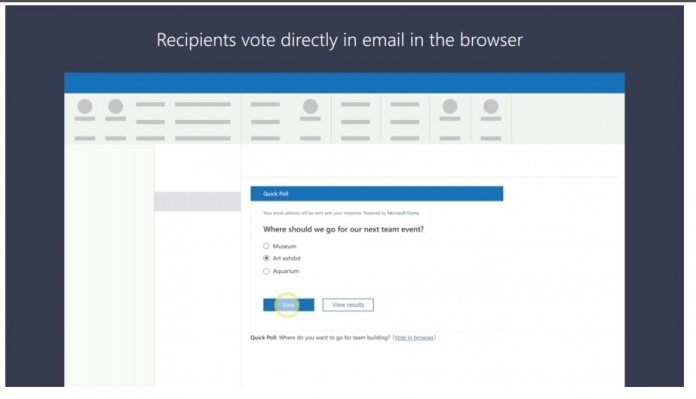 Microsoft Forms users have recently received some new features, which Microsoft has described in a blog post. Features included in the latest update include a Quick Poll tool that integrates directly with Outlook and Outlook.com.

Quick Poll is available on Microsoft Forms as an add-in. As the name suggests, the tool allows users to create real-time polls quickly. When typing an email in Outlook, the Quick Poll add-in button can be used to generate poll questions with answer options.

Recipients who receive the email can vote directly within the mail or click the link to see the question open in a separate window. Poll results are also showed on the voting car in the email.

Microsoft Forms is also receiving a new Branching ability. With this addition, users will be able to create more flexible forms. This feature is available for Office 365 and is being rolled out in stages. Microsoft says the roll out should be finished by early August.

Earlier this month, Microsoft rolled out the Pro version of Forms. Available globally through the Dynamics 365 Enterprise license, Microsoft Forms Pro is also available to other Office 365 users.

Dynamics 365 users can access Microsoft Forms Pro for free, although they are limited to 2,000 survey responses per month. Office 365 users can buy that same amount of responses for $100 each month, which is about 5 cents per response.