Gartner’s awaited report on 2019 cloud providers is live, highlighting the top five providers this year. According to its analysts, these giants have increased their global market share from 73% in 2017 to 77% today.

It puts Amazon Web Service (AWS) on top for IaaS (47.8%), with Azure in second (15.5%) and Alibaba third (7.7%). It highlights Alibaba, Oracle, and IBM as niche players in the market, with Google also marked as a leader.

Though Microsoft’ Azure is in second place, Gartner pegs AWS as a clear leader. It notes that enterprises make larger annual financial commitments to Azure and deploy more mission-critical workloads.

“AWS is the most mature, enterprise-ready provider, with the strongest track record of customer success and the most useful partner ecosystem,” said Gartner. “Thus, it is the provider chosen by not only customers that value innovation and that are implementing digital business projects, but also preferred by customers that are migrating traditional data centers to cloud IaaS.” 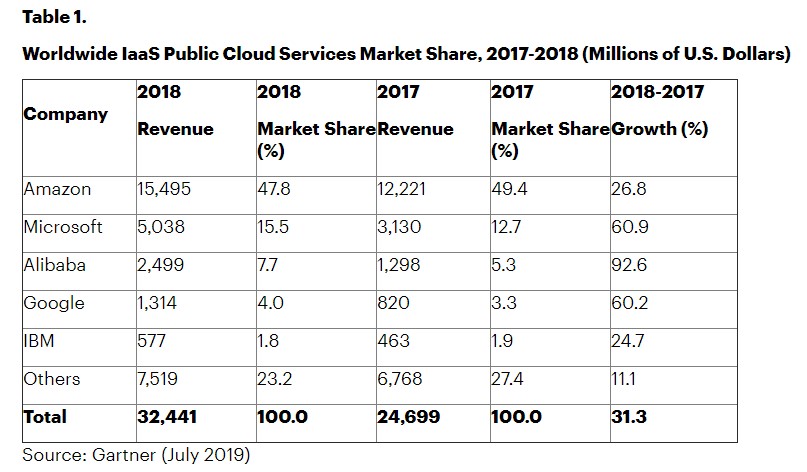 However, it does caution users about AWS’ constant price reduction announcements, which can mislead customers into thinking its the case for the service as a whole, rather than specific elements. It also highlights its tendency to launch feature-poor services.

Azure is Great for IoT but Unreliable

Azure holds slightly different strengths to Amazon’s offering in 2019. Its IaaS services are popular with customers tied into its ecosystem, especially those who use .NET, Visual Studio, and its other software.

Meanwhile, Gartner says Azure has a “well-integrated approach” to IoT, with offerings that reach past is hyperscale data center. It also praised the open and innovative nature of Azure, of which 50% of workloads are now Linux-based, with partners at VMware, RedHat, and more.

Unfortunately, there are some aspects of Azure that have been a clear point of failure. We’ve previously covered numerous global outages and this is a factor Gartner says enterprises are worried about.

“Since September 2018, Azure has had multiple service-impacting incidents, including significant outages involving Azure Active Directory. The nature of many of these outages is such that customers had no controls in order to mitigate the downtime,” explains the advisory firm.

Azure’s technical support and its cost have also been points of contention. Enterprises say it’s low in quality and getting more expensive, which affects their willingness to adopt. Despite this, Gartner recommends for all use cases that run well in VMs, and specifically for Microsoft-centric organizations.