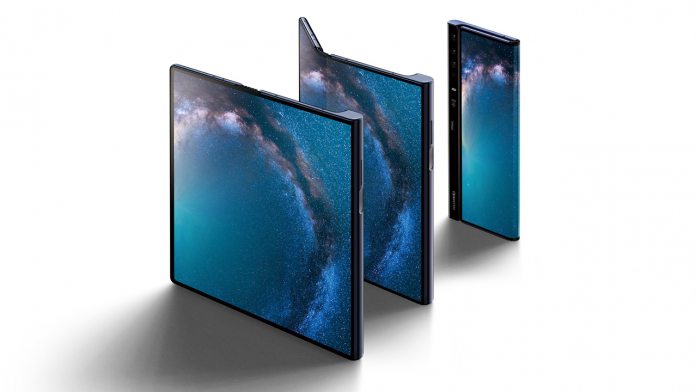 Huawei’s CEO has been spotted with a new version of its Mate X foldable. A revamped design appears to sport a carbon fiber texture on its camera strip, which now sports four lenses.

Interestingly, the new images came from journalist Li Wei, who bumped into the executive at an airport in China. The additional camera is a TOF sensor, according to Huawei’s website, but it wasn’t visible in previous showcases for whatever reason.

The surface area of the button to unhook the foldable display has also expanded. In the images, there doesn’t seem to be a visible crease, as was seen previously, but a lot can depend on lighting and how new the device is.

The Huawei Mate X’s main competition in the west is Samsung’s Galaxy Fold, which has been significantly delayed due to reliability issues. Several reviewers revealed displays with bumps, black portions, or non-functioning halves.

Though some of the issues were linked to the removal of a protective film, others weren’t. The Verge’s Dieter Bohn did not pull off the protector but experienced a bump in the screen, assumedly due to an object entering between the hinge and display.

The Galaxy Fold is now fixed and will hit the shelves in September, at least in some countries. That’s the same month the Mate X was originally scheduled for, and that is now back on the table now the Huawei ban has been suspended. Of course, any changes in that could mean a delay or complete lack of sales for the Mate X in the US.

Either way, seemingly strong a possibly carbon fiber hinge strip may better convince users of the Mate X’s reliability. It will be interesting to see how the two devices stack up on launch.