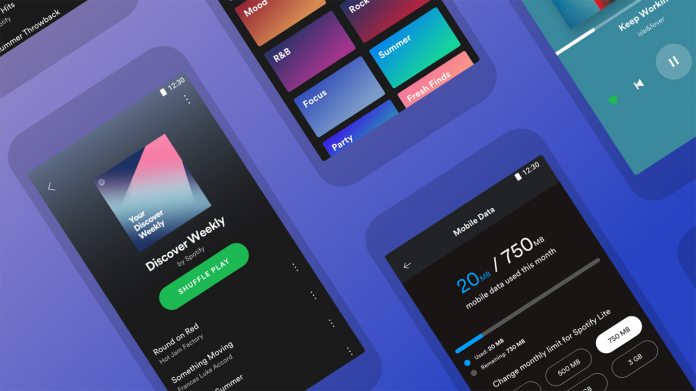 Spotify Lite is officially available in 36 countries in an attempt to cater to more users. The 10MB app has been in testing since mid-2018 and is now ready for anyone to utilize.

This trimmed-down version or the main client is designed to burn through less mobile data, work better on slow connections, and take up less system space. It should be particularly useful in developing countries, but should also help any who don’t have a generous data cap.

The app cuts a few features from its bigger counterpart. Users will notice that the Library has been replaced by a favorites icon, though user’s playlists still show up here. Spotify Lite does not have the ability to sync/control playing music from another device, nor does it have the same degree of options, or podcast support. It also doesn’t support offline playback.

It does, however, have some useful data-focused features. Users can set monthly data cap for Spotify use and will be notified as they pass this limit. They can also clear the cache and storage without rooting through Android settings.

Spotify Lite has four options for audio quality and gives a general estimate of how much data it will use per song. The default Basic quality estimates 0.5MB, while very high is between 5 and 10 MB. As with the normal app, users can also choose whether they’re able to download songs on data or just Wi-Fi.

In our testing, Spotify Lite launched slightly faster, and we can only assume the difference will be more noticeable on low-spec devices.

Unfortunately, iPhone users are out of luck, but Android users can grab Spotify Lite from the Play Store. On Google’s platform, it’s mostly available in developing markets, but anyone can grab a version from APK Mirror.