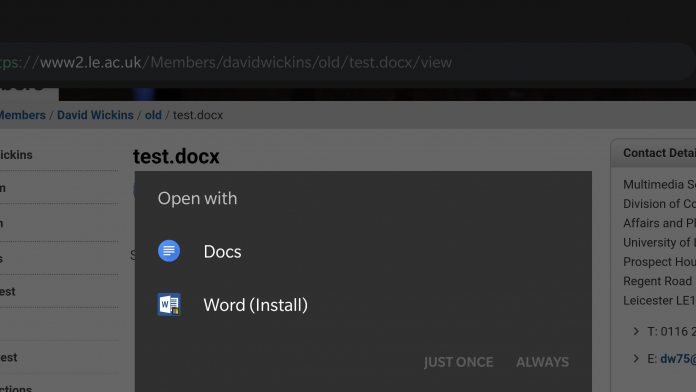 Microsoft has been caught using underhand tactics to get users to install its Office apps. As noticed by Android Police, opening .pptx files on Google’s platform will prompt an install of PowerPoint, even if Slides is already installed.

This behavior appears to originate from the Your Phone Companion app and has been present since April. At that point, Your Phone mirroring was in beta and the future was unclear.

Microsoft’s Android companion app initially acted as a hub for all its apps, showing which users had installed. It was previously known as ‘Microsoft Apps’ for this reason. However, the company introduced a degree of cross-platform functionality between Windows and Android with the Windows 10 April 2018 update. At this point, the app switched to Your Phone branding but kept the app hub functionality.

Your Phone is now out of beta and required for Android mirroring/syncing. With it installed, if you attempt to open a PPTX file without Slides, you’ll go straight to the PowerPoint download page, otherwise, you’ll get a choice between Slides or a PowerPoint install. If you set Slides as the default, you’ll no longer get this prompt. As well as Your Phone, this happens when you install the Microsoft Word app.

In our testing, we noticed similar behavior for .docx files and Word, .xls files and Excel, and other file such formats. It doesn’t seem to happen for most non-Microsoft formats, such as .odt and .txt, though Excel is a recommendation for .mhtml files. In all, this part of Microsoft’s tactics isn’t too much of a concern. Once they set a default, users won’t have to worry, and prompts only seem to appear when they’re actually useful.

When it comes to the OneDrive, Your Phone presents much more intrusive behavior. When trying to share images, documents, or other common file types, users will get a OneDrive install option. Obviously, this adds a little more clutter to the user’s share menu if they don’t want the app.

Admittedly, it’s a minor annoyance, but it also feels like Microsoft is piggybacking off Android’s functionality in shady ways. App developers could end up using this to push unrelated app installs and degrade user experiences.

Surface Duo Spotted in the Wild Complete with Software Demo