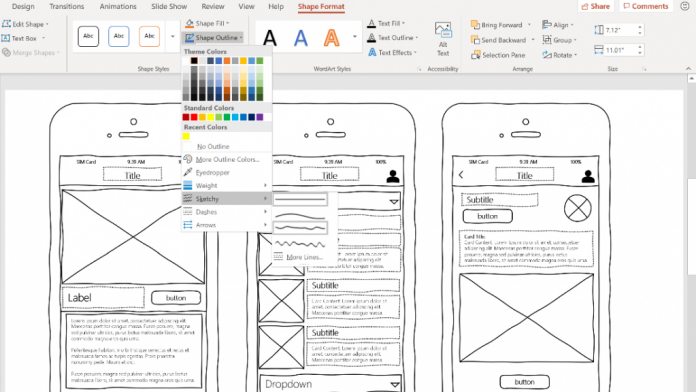 Microsoft is rolling out a new Office 365 feature to Windows and Mac Insiders. Available on builds 1907 and 16.28, respectively, Sketchy Shapes was created to reduce miscommunication when it comes to design status.

To avoid giant ‘NOT FINAL’ watermarks, Sketchy Shapes in Word, PowerPoint, and Excel makes regular linework much messier. By changing the outline style of a shape, users can quickly indicate that their concept is a wireframe, with several different line styles.

The feature brings it closer to the typical hand-drawn early stage sketches you might see in the first phases. At any point, users can turn off the style to indicate a step forward in the design process.

Further, the apps let you create sketchy icons, as well as linework. By importing a black and white icon and selecting ‘Convert to Shape’, you can get a similar hand-drawn style.

This feature is likely to appeal to a certain niche. Though it’s unlikely many designers work in Office, there are plenty of situations this could be useful. Even so, there’s likely to a bit of a learning curve. Initially, users may just be asked why their design is so scruffy.

Microsoft has been pushing a number of features to its Office suite ahead of the next school year, and this is another that could help once it gets out of the testing rings. Last month, the company announced the addition of an immersive reader to Minecraft, collaboration features in Whiteboard, and much more.