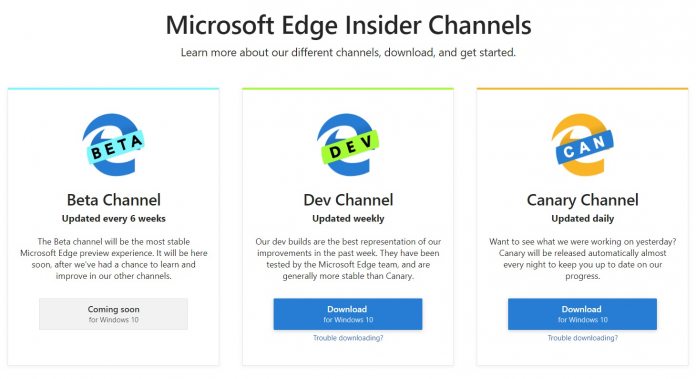 Last week, Microsoft fulfilled a promise and released its Chromium Edge browser for Windows 7, Windows 8, and Windows 8.1. However, the release was limited to the Canary development branch. Now, Microsoft has rolled out the browser on the Dev channel on the legacy Windows platforms.

If you are unfamiliar with the Canary channel, it is updated daily. It is the first release channel and is the most unstable. In other words, it is not really for anyone who want to anything other than test Chromium Edge.

Edge Dev is more stable and delivers updates on a weekly basis. There is worth noting there is also a Chromium Edge Beta channel that has already been announced.

However, Microsoft has yet to confirm when exactly that beta will arrive. When it does, the Beta channel will be updated every six weeks and will be even more stable.

“Microsoft Edge will have the same always up-to-date platform and the same developer tools on all supported versions of Windows and macOS. This will reduce developer pain on the web, while ensuring all Windows customers have the latest browsing options.”

Dev channel releases on Windows 7, 8, and 8.1 will now match with the updates sent out to Windows 10 and macOS. Microsoft sends these updates out ever Tuesday. However, there is no Dark Mode feature supported on these older Windows builds. That’s because a lack of native dark mode on those platforms.

If you are interested in the Dev channel for Chromium Edge on older Windows channels, check it out here.