FPO has published a Microsoft-filed patent for flexible displays just weeks shortly after rumors of a new foldable device. Filed in 2017, but published yesterday, it details a method to curve an OLED display with the help of a movable display support.

The publication was once again spotted by Windows Latest. This time, it contains detailed drawings of what the device could look like, complete with a strange hinge design. In one implementation, the screen is supported by triangular protrusions that press into it as it folds. Another takes a form closer to current Surface book hinges with a chain-like design. 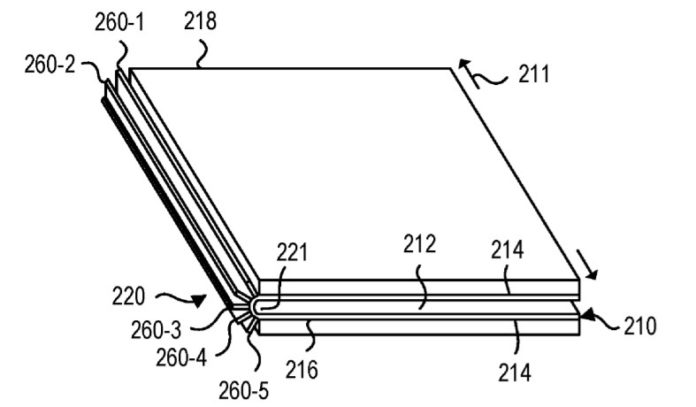 With Samsung Galaxy Fold units recently recalled due to screen breakage, durability for these devices is a huge concern. Microsoft’s method could reduce the chance of issues, but it may not make it to production and we haven’t seen it tested in the wild.

However, recent reports do indicate that the company has been showing off a new dual-screen device to its employees. This device was allegedly Surface Centaurus, the code name for Microsoft’s larger foldable.

However, reports from MSPowerUser seem to indicate that this won’t be a flexible screen device. Rather, the company will join two regular displays to cut costs and avoid durability issues.

Sources say the device will run Microsoft’s upcoming Modern OS, a toned-down version that will adapt to form factors while maintaining win32 functionality. The rumors make it seem unlikely we’ll see a flexible Surface any time soon, but it would be a clear evolution for the new line.