A status update on Uservoice suggests Microsoft has finished work on custom lock screen functionality for its Android launcher. A feature suggested filed in September 2018 was filed as completed on May 14.

The post asks for the ability to move the clock, choose between digital and analog, and generally change the content displayed. It brings the mind back to Microsoft’s Next Lockscreen app, which is technically available via old apks but hasn’t seen an update in some time.

Implementing such personalization would go a long way towards providing a fully-fledged Microsoft experience on Android. It could better tie into the company’s services while giving users more freedom.

However, it’s worth noting that lock screens are less relevant than they’ve ever been. As technology evolves, smartphone creators have been increasingly opting for an Always On Display and fingerprint or facial recognition. This means many users either view notification without turning on their display or bypass the screen quickly with a fingerprint.

Furthermore, it’s strange that Microsoft has marked a feature as complete when we’ve yet to see it in any builds. Usually, features marked as completed are at least available in beta form.

It’s possible the company is waiting for the release of Android Q to ensure nothing breaks, but it’s also possible Microsoft made a mistake. We’re just going to have to wait to find out, though opting into beta builds wouldn’t be a bad idea. 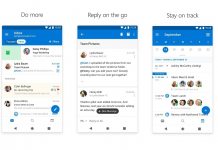 Outlook On Android Gets Annotate Tool

Outlook On Android Gets Annotate Tool