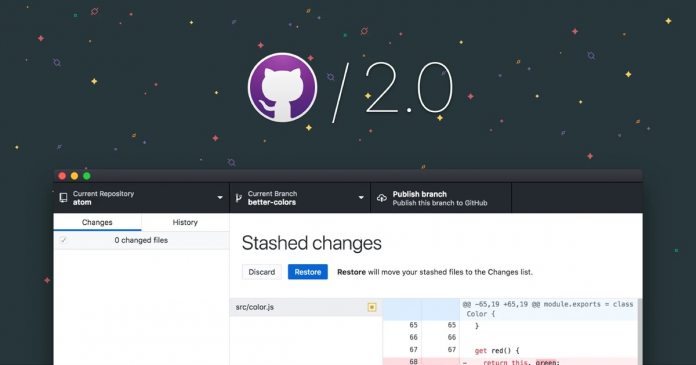 Microsoft’s recently acquired open source repository has announced GitHub Desktop 2.0. As the name suggests, this is the second full release version of GitHub for non-web on PC. With this launch, the company has added new features that aim to enhance workflow.

In a blog post, GitHub says the new version brings Stashing and Rebasing to GitHub Desktop for the first time. According to the company, these are the two most requested features.

“Stashing: It’s a common situation: you’re in the middle of reproducing and fixing a bug, and you need to switch context temporarily. Git branches are incredibly useful, but what do you do with your changes that are in progress? In Desktop 2.0, if you’re not ready to commit your work, you can choose to bring your changes to the new branch or keep them on your current branch.

Rebasing: Developers have also shared that many teams prefer a clean commit history without merge commits. This is a great example of where preferences dramatically differ. If you’re used to merging branches normally, you can still continue using the same workflow. But if you work in a repository where you don’t want those merge commits, Desktop 2.0 now supports rebasing to help you keep that commit history clean.”

Since Microsoft acquired GitHub for over $7 billion last year, the company has seen steady development. Of course, Microsoft purchased a ready-to-go package and has merely allowed GitHub’s growth to continue independently.

Last month was a particularly important one for GitHub. The company announced its new Sponsors platform. Under the program, users will not be paying for services, but rather backing the projects and developers they want to support. It is a similar idea to Patreon, which allows people to back content creators.

GitHub has also announced a GitHub Sponsors Matching Fund, an accompanying program. Under this program, the company says it will match all user sponsor contributions up to a value of $5,000 during the first year of the Sponsors initiative.