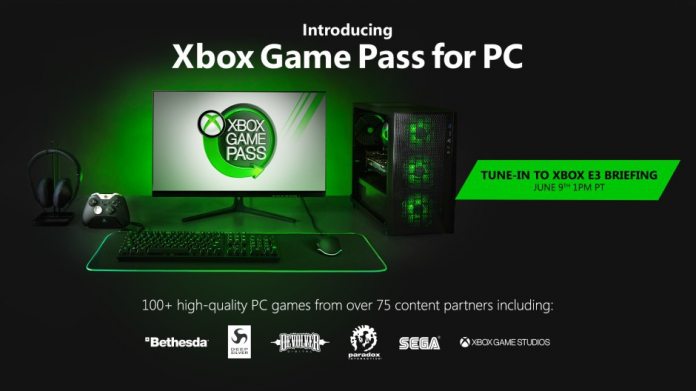 Microsoft has confirmed it will launch its Xbox Game Pass service on PC but won’t expand on the full solution until June 9. Still, the company did offer some basic details around what we can expect from PC Game Pass on Windows 10.

If you are unfamiliar with Game Pass, it is available on Xbox One consoles as Xbox Game Pass. The service allows users to pay a monthly subscription ($9.99) to have access to hundreds of games that are available digitally.

It has been rumored that Xbox Game Pass will come to PC eventually. Microsoft says PC Game Pass will offer over 100 games at launch. Major publishers are already on board, including Bethesda, Paradox Interactive, SEGA, and more.

“We’re working with over 75 developers and publishers to bring PC content to the service and we’ll ensure the library remains curated and full of great PC titles across a variety of genres, with new games added every month.”

Like Xbox Game Pass, the service will also allow access to all new first-party games published by Xbox Game Studios on the day of their release.

Microsoft says PC Game Pass will also give members discounts for games in the Microsoft Store. Discounts will be 20% on titles already in the Store and 10% off DLC additions.

One interesting aspects of Xbox Game Pass for PC is it has full support for native Win32 games through the Microsoft Store.

“We want creators to be inspired to bring their best content to Windows 10, and we want Windows 10 to be the place where gamers come to discover their next favorite PC game. We recognize that Win32 is the app format that game developers love to use and gamers love to play, so we are excited to share that we will be enabling full support for native Win32 games to the Microsoft Store on Windows. This will unlock more options for developers and gamers alike, allowing for the customization and control they’ve come to expect from the open Windows gaming ecosystem.”

Microsoft says more details on the new PC Game Pass will be given at its E3 briefing on June 9.