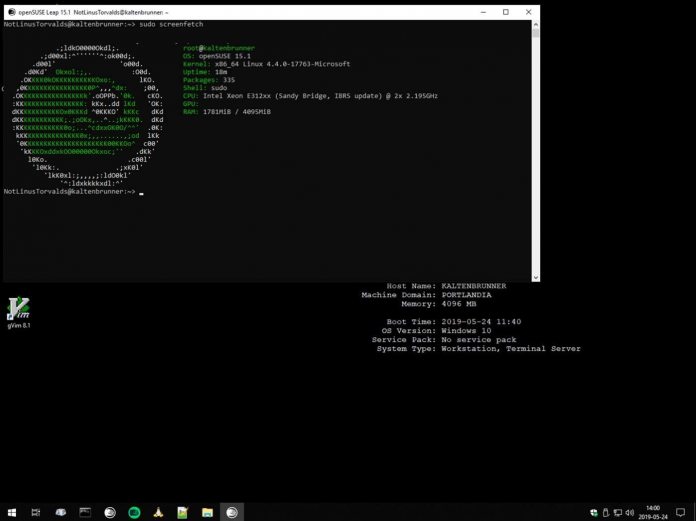 Microsoft has been expanding its Windows Subsystem for Linux (WSL) recently. Among the benefits of WSL is the ability to run Terminal of Linux distros on Windows 10. Among the available distributions are SUSE Linux, Fedora, and of course Ubuntu.

The latest distro to join Windows Subsystem for Linux is openSUSE-Leap-15-1. Microsoft says the distribution is available now from the Microsoft Store.

Target users for the distro include:

To download OpenSUSE Leap 15.1 from the Microsoft Store, you will need to enable WSL in Windows 10 Settings.

Essentially, Microsoft is rolling out the Linux kernel as part of Windows Subsystems for Linux version 2. It is worth pointing out this is not Windows 10 becoming a Linux distribution. The platform will continue to be based on its own Windows-based kernel. Microsoft is instead “shipping a real Linux kernel with Windows that will make full system call compatibility possible.”

“Beginning with Windows Insiders builds this Summer, we will include an in-house custom-built Linux kernel to underpin the newest version of the Windows Subsystem for Linux (WSL). The kernel itself will initially be based on version 4.19, the latest long-term stable release of Linux. The kernel will be rebased at the designation of new long-term stable releases to ensure that the WSL kernel always has the latest Linux goodness.”