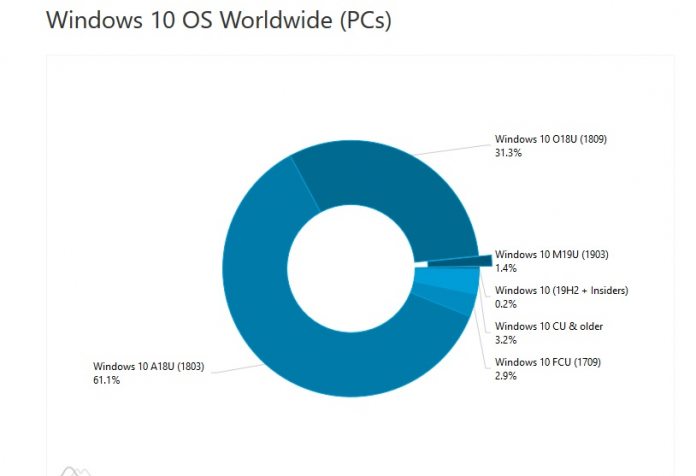 Market researcher AdDuplex has announced its latest monthly figures for Windows distributions. The latest results show the Windows 10 October 2018 Update is only the second most used version with 31.3 percent of the market. This may be as high as version 1809 ever flies now that version 1903 (May 2019 Update) is rolling out.

It’s a situation we discussed back in March, highlighting how many Windows 10 users will never get the October 2018 Update.

Sure, much of the reason behind this is the delay Microsoft put on version 1809. Launched in October, Microsoft was forced to pause the update under a glut of issues. While the October 2018 Update returned in November, Microsoft’s rollout became more cautious afterwards.

Microsoft has increasingly said it wants as many users running the same Windows build as possible. However, there is an argument that the company’s twice-annual feature upgrades are causing fragmentation across the platform.

The ideal for Microsoft would be for the vast majority of users to get onto version 1903 as fast as possible. However, a look at the current market distribution shows that may be unlikely. While the Windows 10 October 2018 Update takes 31.3 percent, its predecessor (April 2018 Update) holds 61 percent.

Yes, version 1803 is the dominant platform, but it is also now a year old. Its replacement holds a third of the market, just as a new version is reaching users. Microsoft will hope to move as many of the April 2018 Update users onto the May 2019 Update quickly.

That said, in a couple of month’s time, market distribution could look like Windows 10 version 1803, version 1809, and version 1903 all holding a fair chunk of the market. As for the latest release, Windows 10 May 2019 Update has made its way onto 1.4 percent of devices so far.

When discussing AdDuplex data, it is important to note the following:

“If you are unfamiliar with the AdDuplex reporting method, it is not a complete overview. However, it has become an accurate snapshot of the Windows market and device use. The company studies Windows Store app data from application that run the AdDuplex SDK. There are about 5,000 apps with the SDK.

While this is far below the total number of apps in the store, it presents a solid representation of the state of Windows. That, and the fact AdDuplex follows the market on a monthly basis give us a good idea of how many people are using certain Windows builds.”