Yesterday, Microsoft started to roll out the Windows 10 May 2019 Update, ushering in a new era of scheduled updates to ensure more stable releases. However, it seems Windows 10 version 1903 already has some issues. Microsoft is working on fixes for three problems that are affecting early adopters.

While it does not seem any of these will force the Windows 10 May 2019 Update to be paused, Microsoft is advising users to avoid manual updates until fixes have been released.

One of the problems is limited to machines using Intel chips, which is admittedly most PCs. Microsoft says version 1903 is causing a driver compatibility error with Intel devices.

While Microsoft works on a fix for the Intel compatibility problem, there is a workaround available. If you already have the Windows 10 May 2019 Update, reboot your device to make brightness changes. Microsoft has blocked the update for devices with Intel machines.

The second problem in Windows 10 version 1903 involves devices using Dolby Atmos technology. Microsoft confirms these machines could lose audio once the May 2019 Update is installed. This is because of a licensing configuration problem in the new update.

“This occurs due to an issue with a Microsoft Store licensing component, where license holders are not able to connect to the Dolby Access app and enable Dolby Atmos extensions,” the company says.

Unfortunately, there is no workaround for this problem, and Microsoft says a fix won’t arrive until mid-June.

Finally, Microsoft also describes an issue where the May 2019 Update leaves empty folders in libraries if they redirected known folders.

“This may occur if known folders were redirected when you chose to back up your content to OneDrive using the OneDrive wizard, or if you chose to back up your content during the Windows Out-of-Box-Experience (OOBE). This may also occur if you redirected your known folders manually through the Properties dialog box in File Explorer. This issue does not cause any user files to be deleted and a solution is in progress.”

Microsoft promises a fix this month for this problem, while no workaround is available in the meantime. 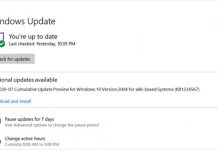 Optional Windows 10 Updates Return in July With a Difference