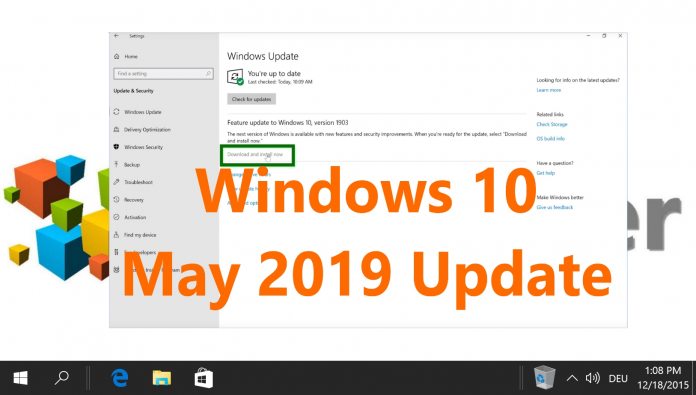 Back last month, Microsoft changed the way it updates Windows 10 and in the process surprised us by saying Windows 10 version 1903 would not be the April 2019 Update. Instead, it is Windows 10 May 2019 Update. Today, Microsoft has launched this latest upgrade, making it available officially for the first time.

The decision to launch Windows 10 version 1903  in May instead of April was part of a wider Microsoft strategy to extend the preview period. Simply put, issues with last year’s April 2018 and October 2018 Updates led to a rethink.

By changing its release pattern, Microsoft insists it can better ensure stable builds at launch. Previously, the company would finalize a Windows update one month and then launch it weeks later at the start of the next month. Under the new schedule, the company has put nearly two months between build finalization in preview and general availability.

Microsoft has announced the availability on its Windows Blog today. The company points out users can start to get the Windows 10 May 2019 Update:

“Beginning today, the May 2019 Update is available for customers who would like to install the latest release. If you are ready to install the update, open your Windows Update settings (Settings > Update & Security > Windows Update) and select Check for updates. Once the update appears, you can select Download and install now. (Note: You may not see Download and install now on your device as we are slowly throttling up this availability, while we carefully monitor data and feedback). Once the download is complete and the update is ready to install, we’ll notify you so that you can pick the right time to finish the installation and reboot, ensuring the update does not disrupt you. This new ‘Download and install now’ capability is available for devices running Windows 10, version 1803 or version 1809 that also have the May 21st updates (or later) installed.”

Microsoft also announced the release of Windows 10 1903 also means the April 2018 Update (version 1803) is reaching end of service. The company says the closure of service support will happen on November 12, 2019 for Win10 Home and Pro users.

For old PCs this might become a problem, as starting with the Windows 10 May 2019 Update you will need at least 32 GB disc space, up from 16GB for 32-bit versions, and 20GB for 64-bit from earlier versions.

Of course, the Windows 10 May 2019 Update is a feature upgrade that adds plenty to the platform. Windows Shell has been given a refresh across the Start menu, Taskbar, and Action Center. This change is focused on a new “Light” theme for Windows 10 which looks excellent across the platform.

Cortana may be moving inwards within the Windows experience, but she is receiving attention. Through the Windows 10 May 2019 Update, Windows Search and Cortana are now separated on the surface. For the overall search experience this is a good move as it moves Cortana out of the way. However, for the virtual assistant it gives it very little to do.

For example, Cortana no longer provides meeting information, weather forecasts, or anything similar. In fact, the assistant does not even have an interface anymore. It seems Microsoft’s promise to make Cortana a productivity centerpiece of Windows and not a personal tool is now in fruition.

Perhaps the biggest addition to Windows 10 through version 1903 is Sandbox mode. As the name suggests, Windows Sandbox runs programs on the platform in a disposable virtual machine. This VM never interacts with the OS, allowing potentially dangerous services to be run securely. Microsoft says Sandbox is limited to Windows 10 Pro and Enterprise users.

File Explorer sees some improvement, too, as the Windows 10 May 2019 Update separates File Explorer folders into independent processes by default.

For all other new features of the Windows 10 May 2019 Update, mostly minor, please check our previous articles about Windows 10 version 1903.