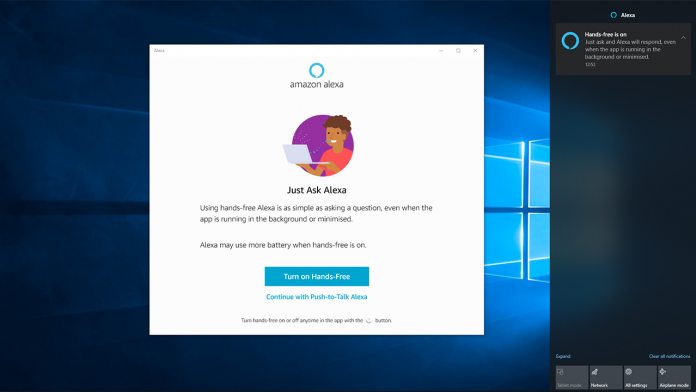 Since its release on Windows 10, the Alexa app has received abysmal ratings. Aside from its competition with Cortana, it was missing much of the functionality of the web app and required manual evocation unless you had a compatible PC.

As of today, that’s no longer the case. An update to the app adds a ‘hands-free’ mode which adds Alexa to the startup applications and lets users invoke her from any screen while the app is minimized.

To so, users can say ‘Alexa’, followed by any key phrase. All they need is a microphone attached to the PC, no special hardware required. The functionality goes a long way towards replacing Cortana, who has fallen behind in recent years and is undergoing a change of strategy.

All Eyes on Google

Notably, it’s also a feature not available with Google Assistant, which does not have a Windows 10 presence. This is likely to encourage users to use its Chrome OS, though there are complex ways to enable Google if you use Chrome.

Microsoft has previously stated its desire to integrate Google Assistant in Cortana in a similar way to Alexa. Cortana users can open Alexa via voice commands on certain devices, and vice versa. So far, Google has not been receptive to the idea.

Meanwhile, Amazon is working closely with Microsoft to bring its assistant to more devices. It’s launching an app for Xbox One, further extending its reach. The Windows 10 app also received support for Pandora’s online radio station in certain regions.