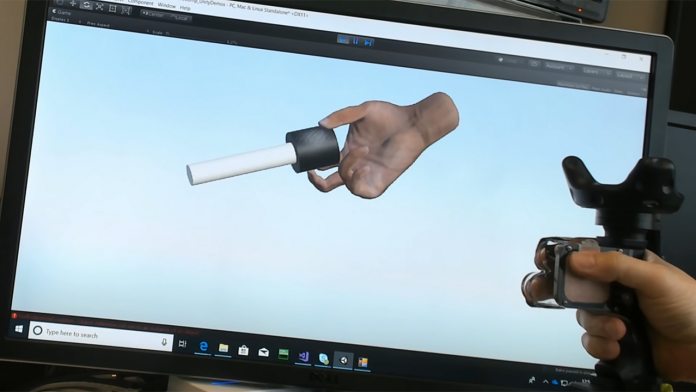 Microsoft Research has been working on several solutions to this issue. Haptic Links looked to improve the consistency of controls while adding bimanual haptics. Its bulky CLAW controller let users feel objects in VR. Its latest invention is perhaps the most exciting, giving users the ability to squish objects and manipulate them with fingertips.

Named TORC, or Touch Rigid Controller, it consists of a palm-sized block users can apply pressure to. Users can use it to feel the outline of hard objects, squash elastic ones, or rotate them in 3D space with a high degree of dexterity.

“The user can move a thumb freely on the surface of TORC parallel to the plane of the two fingers to rotate a virtual object. At the same time, rendered vibrations let the fingers feel the object’s properties such as texture and pseudo-compliance,” reads a Microsoft Research blog post.

Of course, the haptics functionality also lets users grab and drop objects with ease. Rather than struggling with controller buttons, TORC keeps an object in your hand if there’s enough force, and drops it if not.

Though TORC’s prototype design contains a bulky bar grip, the team believes its could be incorporated in a variety of controllers or even pens. The idea isn’t necessarily to bring the product to market, but to encourage the wider community to “pursue future work on the design of VR/AR controllers”.

Microsoft will be debuting a demo of TORC as CHI 2019 in Glasgow, where it hopes to get further feedback on its design. Though it’s clearly still early stages, creative thinking like this provides a lot of hope for the future of virtual and augmented reality.