A former YouTube web developer has spoken about a purposeful effort from inside the company to kill Microsoft’s Internet Explorer 6. On his blog, Chris Zacharias talks about an effort from a small team to go against Google’s wishes and undermine the competing browser.

“IE6 had been the bane of our web development team’s existence. At least one to two weeks every major sprint cycle had to be dedicated to fixing new UI that was breaking in IE6,” he said. “We understood that we could not just drop support for it. However, sitting in that cafeteria, having only slept about a few hours each in the previous days, our compassion for these users had completely eroded away. We began collectively fantasizing about how we could exact our revenge on IE6.”

After elements as simple as image tags without a source managed to break IE6, the team took action. Zacharias says his team slipped into production a vague banner telling users support for their browser was ending. The Google Docs team allegedly arrived at the same decision independently. 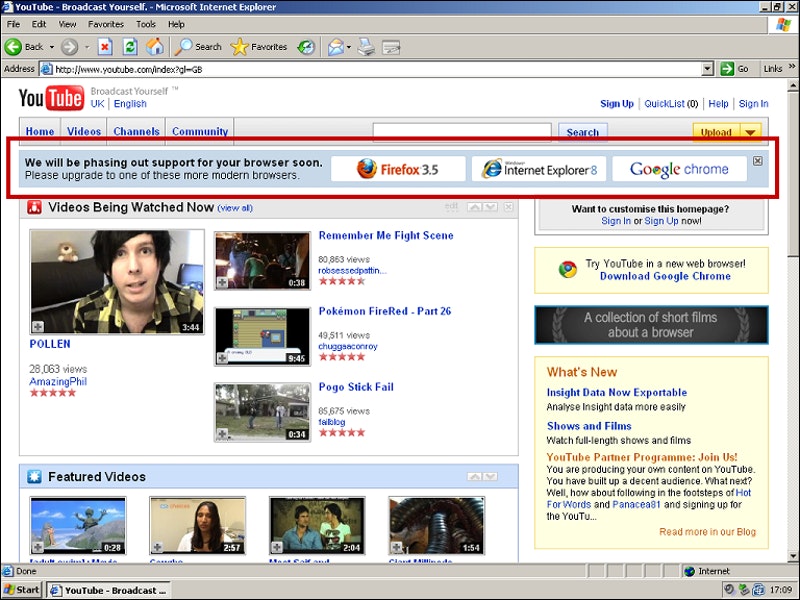 The Fall of Internet Explorer

Shortly after the campaign, IE6 usage dropped worldwide, from a total of 25% market share in mid-2009 to less than ten percent within a year. Google eventually dropped support officially in 2010.

Though the banner was immediately noticed by Google PR, lawyers, and managers, Zacharias says they weren’t punished. The media ran with the story in a positive light, and Google’s willingness to declare an impending end to support prompted other websites to do similarly.

At the point of the banner’s introduction, Microsoft had already introduced IE8, but many were transitioning to Google’s Chrome browser. Internet Explorer’s share continued to fall as Chromes rocketed, overtaking it in 2012.

It’s not the first time Google has been accused of such tactics. Late last year, a former Microsoft Edge intern shared his belief that the company intentionally slowed EdgeHTML. Engineers reportedly added a hidden div that broke Edge’s hardware acceleration fast-path. This apparently coincided with a campaign by Google suggesting its browser had better video watching battery life.

In the case of IE6, however, it’s unlikely Microsoft was particularly upset. It was already trying to encourage users to switch to a newer version and in 2011 it would launch its own campaign to help developers ditch support. While some argue such efforts from Google are anti-competitive, others would say devoting a large amount of time to a poorly featured browser is unreasonable.