Microsoft has several contracts with military organizations, most of them controversial. Perhaps the newest partnership will not court quite as much ire. The company has announced a collaboration with the U.S. Department of Veterans Affairs to provide Xbox Adaptive Controllers to VA rehab centers.

Gaming has become a core part of helping combatants readjust following an injury. It can lessen the feeling of isolation and forge connections with people from within and outside service.

Microsoft says it will supply Xbox Adaptive Controllers to 22 VA rehab centers across the United States. The company will collect data from the controllers to see where the gamepad is succeeding and what changes can be made in the future.

“We’re looking for platforms for veterans to interact with each other, and the Xbox Adaptive Controller can be that access point to get involved in this world and in the gaming community,” Nelson says. “Gaming is now everywhere in the world, and while people tend to think of it as isolating, we’re finding that it actually has the opposite effect and can increase interactions with other veterans and folks who are non-veterans. I think this can be a tool in the rehabilitation process to achieve a lot of different goals.”

Microsoft has been developing the Xbox Adaptive Controller since 2016. In a collaboration with disabled gamers, the company created a controller based on their specifications. Additionally, Microsoft worked with The AbleGamers Foundation, The Cerebral Palsy Foundation, SpecialEffect, Warfighter Engaged to develop the best results.

The device launched last year and costs $99. In November, the controller was named amongst Time Magazine’s top 10 best inventions of 2018. 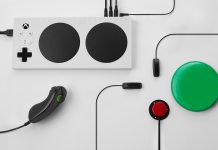