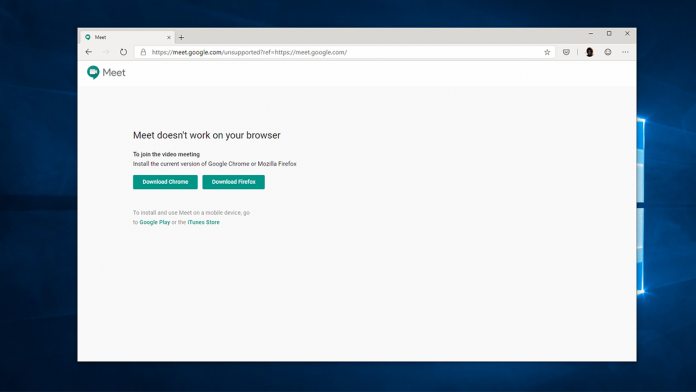 Google Meet has suddenly stopped working on Chromium Edge. Visiting the page in Microsoft’s browser now tells users they must update to a recent version of Chrome or Firefox to utilize the service.

With prompting from Windows Central, we tried the service on Edge with its user agent set to Chrome and ran into no issues. Edge Dev has not been updated in a week, so the evidence points to a change on Google’s end.

At this point, it’s worth noting that the block may not be malicious. Google could have noticed bugs or strange behavior on Meet with Edge that the public isn’t aware of. It could also be a simple mistake.

However, this definitely wouldn’t be the first time Google has been accused of such tactics. A former Microsoft Edge intern accused Google of purposefully slowing down EdgeHTML to reduce competition. Mozilla executives have accused the company of similar practices.

Chromium Edge is seeing a lot of interest for a pre-release browser. Though we’re yet to see detailed statistics initial impressions from publications have been strong. When Chromium Edge becomes available, users are wondering if they’ll need Chrome at all.

The issue comes at a convenient time for Google, but it’s worth noting that Microsoft is not blameless here. Just last month, it temporarily blocked its new Skype for Web on Chromium devices. That Google would do the same for its rival service is very coincidental.

Anyway, the bottom line is that you’ll want to switch your user agent to use Meet on Chromium Edge. You can do so by opening the developer panel (Ctrl+Shift+I), pressing the ‘more’ menu in the top right, and selecting ‘Network conditions’. You can then untick Select ‘automatically’ under User agent and choose ‘Chrome – Windows’. Alternatively, there are several Chrome add-ons that will do this for you.