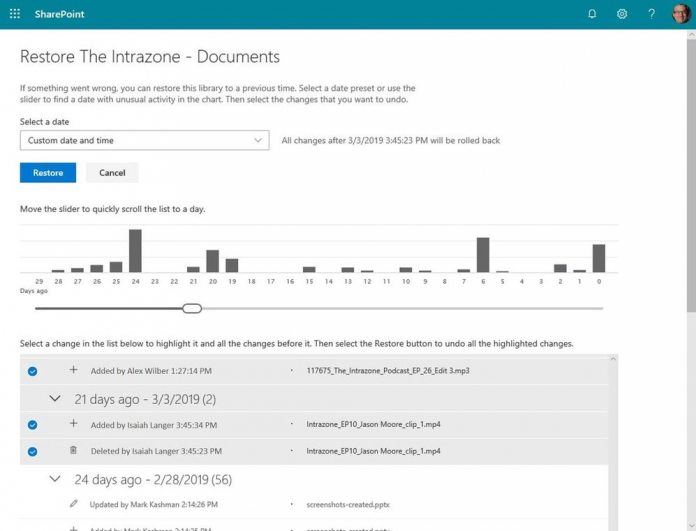 Microsoft Teams and SharePoint users are receiving a handy new feature. Microsoft has announced it is rolling out Files Restore to the two services. Using this tool, admins and customers can restore files to any point over a thirty-day period.

In a blog post to announce the new Microsoft Teams and SharePoint recovery tool, Microsoft described Files Restore as a self-service solution for recovering lost files. To find the feature, head to the gear settings icon and follow the path Restore this library > select a date range > select your files > click Restore.

Site owners and admins can restore from any point over the previous 30 days, allowing files to be restored to the library. Microsoft says the tool is added protection against malware attacks, file corruption, and accidental end-user deletion.

“If lots of your SharePoint or Teams files get deleted, overwritten, corrupted, or infected by malware, you can restore your entire document library to a previous time. Files Restore helps Office 365 subscribers undo all the actions that occurred on both files and folders within the last 30 days.”

The new feature is available for SharePoint users through document libraries, allowing the protection of files across SharePoint, Teams, Yammer groups in Office 365, and Outlook.

Yes, this is the same technology Microsoft has been using in OneDrive for Business since last year. In fact, we are surprised it has taken the company this long to move the feature to Teams. SharePoint is the underpinning of OneDrive, so the tech was an easy switch.

The feature allows OneDrive users to easily restore their files from any point from the past 30 days. This is extremely helpful if you accidently delete a file, recover lost data, or head back to a safe point if you suspect an attack.