Microsoft has seemingly decided to roll out the Windows 10 May 2019 Update (version 1903) to MSDN (Microsoft Developer Network) for download. This decision comes despite the company moving the release of the update from mid-April to late May at the start of this month. While originally believed to be a mistake, it seems the rollout was intentional.

Yesterday, MSDN users started noticing the Windows 10 May 2019 Update appearing as available. Microsoft was originally expected to roll out this update this month. However, the company made a change in update strategy to avoid unstable releases and moved the release to May.

Commercial customers usually get updates the same time other Windows 10 business channels receive them. In other words, MSDN availability was not expected until next month.

Discussing how it will handle commercial updates under its new strategy, Microsoft previous confirmed:

“Our commercial customers can begin their targeted deployments in late May, which will mark the beginning of the 18-month servicing period for Windows 10, version 1903 in the Semi-Annual Channel. We recommend IT administrators start validating the apps, devices and infrastructure used by their organizations at that time to ensure that they work well with this release before broadly deploying. The May 2019 Update will be available in late May through Windows Server Update Services (WSUS), Windows Update for Business, the Volume Licensing Service Center (VLSC) for phased deployment using System Center Configuration Manager or other systems management software.”

So with this in mind, why is the Windows 10 May 2019 Update already available on April 18? It seemed like someone at Microsoft had pulled the trigger too quickly. However, it is now looking like this was actually not a mistake on Microsoft’s part.

It seems like Microsoft is parting MSDN from business channels and making it a separate developer release cycle. That means developers can now get their hands on Windows 10 May 2019 Update ahead of other commercial users. 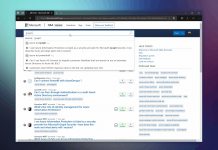