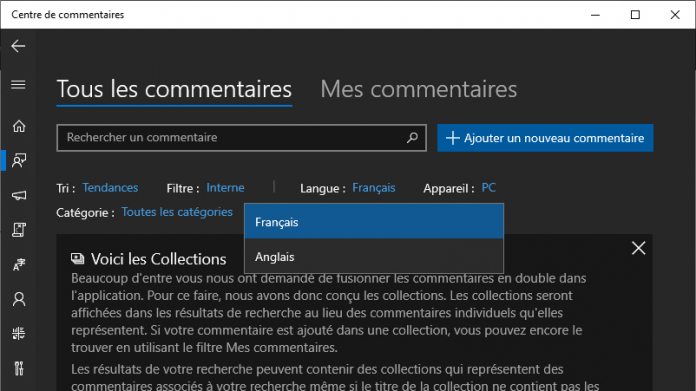 Microsoft has finally implemented language switching in Windows 10’s feedback hub. The feature has been widely requested for at least a year for users with a non-English system language.

Previously, the Feedback Hub would display information in the system language exclusively. This meant users from Germany, for example, would only see posts by German users. Due to the limited number of users posting feedback in the language, this made it difficult to create widespread discussion and meant Microsoft would have to translate any feedback.

Insider Fast Ring users will now notice a language drop down to access the US version of the Hub. In some cases, this should mean access to more variation and quality in content.

Unfortunately, the feature is limited to English right now. You can’t switch from English to French, or from French to German, for example, if you live in a multi-lingual country. it’s possible this feature will launch after Microsoft tests its current implementation.

Microsoft’s Devin Sinah unveiled the feature on the r/Windows10 community on Reddit. The Feedback Hub is essential to catching bugs and garnering feature suggestions, combining with internal testing to resolve many issues.

As a result, Microsoft hosts a yearly Ask Me Anything on Reddit where users can suggest Feedback Hub improvements. It’s there that the language request first arose. Users also requested more filters, performance and reliability updates, and UI improvements.