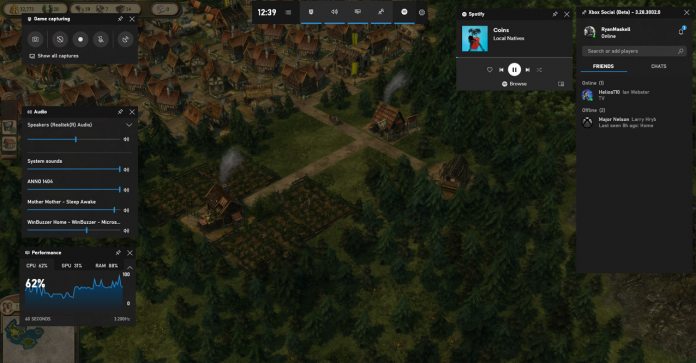 Microsoft has announced what’s likely to be the Windows 10 Game Bar’s biggest update. Several features are rolling out to Xbox Insiders which improve social, music, screenshot and sharing integration.

Easily the most significant is the ability to access Spotify while in game. Users can access a widget for the app by pressing Win+G, with the ability to change tracks, select playlists, and change playback device. The only requirement is the installation of the Spotify app.

Microsoft is also building tighter integrations with its services, from Xbox to Mixer and the Insider Hub. Gamers will be able to access the Xbox Social widget, meaning text and voice communication without tabbing out. They’ll also be able to see what friends are playing and watch their Mixer streams.

After taking feedback, the company is also enabling more customization options. Users will be able to choose which widgets they want to show, pin them, and switch the layout. This is joined by improved screenshot tools that will let users edit a video or screenshot, add text for a meme, and share directly to Twitter.

These features will be available in any game in Windows 10, providing some extra functionality over solutions from Nvidia and AMD. To join the beta, users must download the Xbox Insider Hub from the Store and select ‘Windows Gaming’. Those on build 17763 or higher will then be rolled into the build automatically.

The improvements are part of Microsoft’s wider effort to improve PC gaming on the platform. Previously, it introduced tools to throttle background CPU and RAM use while gaming, as well as an automatic focus assist while playing.