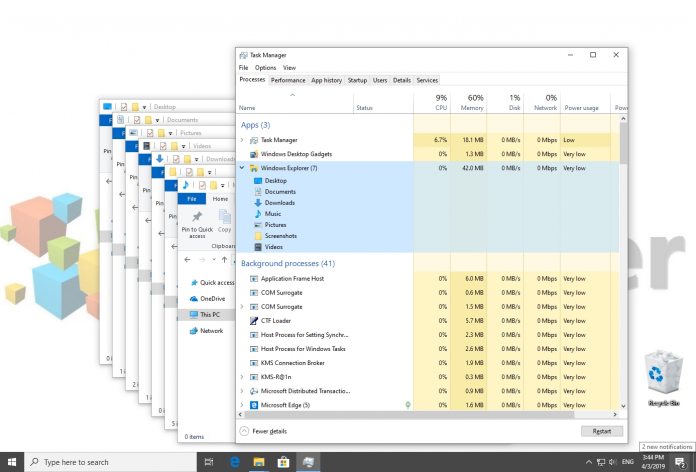 Windows 10 April 2019 Update (version 1903) is just around the corner, likely to launch either this week or early next week. As Microsoft has been putting the finishing touches to the build on the Inside, we are learning a bit more about what it offers. One interesting element shows Windows 10 version 1903 segregates File Explorer folders by default.

Users on the Fast and Slow ring of the Insider Program report the build launches File Explorer folders in separate processes. This is a default feature that basically means Windows 10 folders each have their own running process when opened.

This is interesting because it keeps a running folder open if the rest of the system crashes. Windows users will know the platform typically crashes system-wide if a single folder decides to freeze. To solve this currently requires restarting the affected folder, closing the relevant process, and potentially even restarting the PC.

Thanks to the new feature, users will be able to simply move on and close the affected folder. As mentioned, the new ability is switched on in Windows 10 April 2019 Update by default. However, users can turn it off (or indeed on again) through the Settings app. To do that, head to Folder Options > Launch folder windows in a separate process and toggle on/off as desired. You will still be able to see the File Explorer process in the Task Manager. Now there will be separate windows will now be listed.

Microsoft will likely say it is another example of the feedback nature of the Insider Program paying off. Many users have long requested this feature and it is now being delivered this month.

When that will be remains to be seen as Microsoft has not put an official date on the launch of Windows 10 version 1903. Still, next week seems the most likely as the RTM build is already running on the Inside.