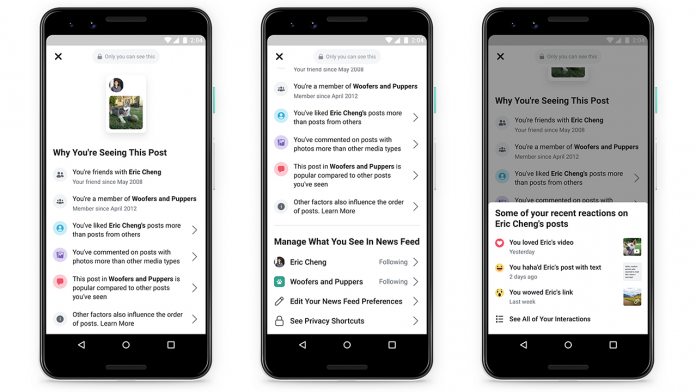 Facebook’s News Feed has seen a significant amount of criticism over the years. Slowly, users realized they were seeing more posts from businesses than friends, an issue the company was forced to address.

However, with Facebook’s algorithm working behind the scenes, it’s still not entirely clear why some posts appear. A recent app update is looking to address this, expanding the sites ‘Why am I seeing this ad?’ feature to all posts.

It gives an unprecedented look into the factors that influence Facebook’s feed, increasing transparency while providing controls for easy adjustment. The company says this is just a fraction of the thousands of ‘signals’ utilized, but it does provide some much-needed insight.

For example, some users complain that old acquaintances can trump close friends in terms of news feed preference. Facebook might tell you this is because you’re members of the same group, have liked a high percentage of their posts, and interact the most with images.

This expansion extends to ads, where the platform will give more detailed information about why users were targetted. Arguably, this is a more important addition to build trust, now showing users if companies have found them via an uploaded a customer list that contains their email or phone number. It also confirms whether the company is working with a marketing partner to display the advert and provides an exact timeline of when the list was uploaded and when you saw the ad.

From Facebook, it’s a startling yet necessary display of transparency. This type of insight is very rare on the customer side, but the company has a lot of trust to rebuild.