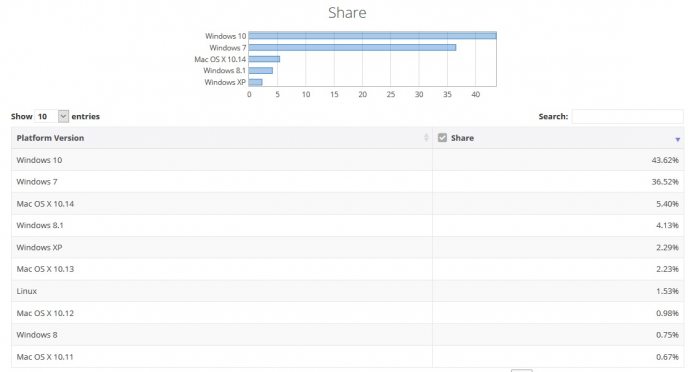 Netmarketshare is back with its quarterly does of Windows market information. In its latest report, the market researcher shows Windows 10 growth continues to be steady. In more good news for Microsoft, its Edge browser is also enhancing its share of the market.

Perhaps the big news is Windows 10 continuing to put distance between it and Windows 7. Only over the last few months as the newer OS been leading desktop market share. Through the last quarter, Win10 increased its share to 43.62%, with Windows 7 dropping to 36.52%.

Yes, it is still amazing that Win7 is sticking around in those numbers considering Microsoft will end support on Jan 1, 2020. However, it is testament to the platform’s legacy in enterprise that its numbers remain so high.

As for Windows 10, it has been clawing into Win7’s lead since it launched in 2015. We can expect the gap between the platforms to increase throughout the year as the mass upgrade migration to Windows 10 kicks into top gear.

Perhaps the more surprising news is that Microsoft Edge has enjoyed a rise in its market presence during March. Netmarketshare points out Google Chrome remains the dominant force in this sector with 67.88% or the market, while Firefox is at 9.27%.

Another Microsoft legacy service is sticking around, this time Internet Explorer with 7.34% of the market. As for Edge, the browser has moved to 5.20%.

Microsoft will hope its recent decision to move Edge to a Chromium base will make it more competitive against Chrome. Not least because the browser will now have access to all Chrome Extensions.