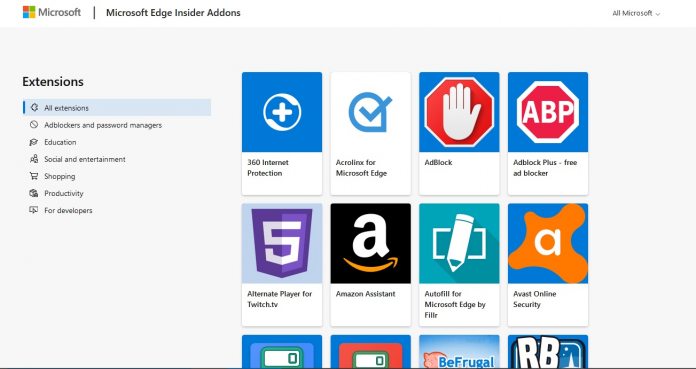 Just yesterday, we reported about a leak of Microsoft’s upcoming Chromium Edge browser. I speculated that the company is preparing to launch the Chrome-based solution alongside the Windows 10 April 2019 Update. It seems that is more likely as the Microsoft Edge Insider addons webpage is now live again.

When Microsoft confirmed its was switching Edge to a Chromium base, the company said it will support all Chrome extensions. Earlier this month, the Microsoft Edge Insider addons page went live before being taken down again.

That time it seemed like someone at Microsoft had pulled the trigger too fast and the page was then removed. Now the company seems to be opening the doors on the addons page officially. It is worth noting the Chromium Edge browser is still not available in preview.

It looks as though Microsoft is putting the necessary infrastructure in place for the preview release in early April. Yesterday the company debuted an Edge extension for Insiders and has now uploaded the addons page.

Just like earlier this month, the amount of extensions was limited to 82 but has now grown to 113. Microsoft will be expanding this overtime and Chromium Edge can support all Chrome extensions in theory.

Back in December, Microsoft announced it will abandon its EdgeHTML web rendering technology and move its Edge browser to Google’s Chromium technology. The idea is to give Edge more access to apps through web apps to better compete with Chrome.

Microsoft has also been working on implementing Edge features onto Chromium, so expect Google Chrome to gain some Redmond-influenced abilities in the near future.

As noted, Chromium Edge is likely to launch in preview alongside the full release of Windows 10 version 1903, which is scheduled to be rolled out next month.