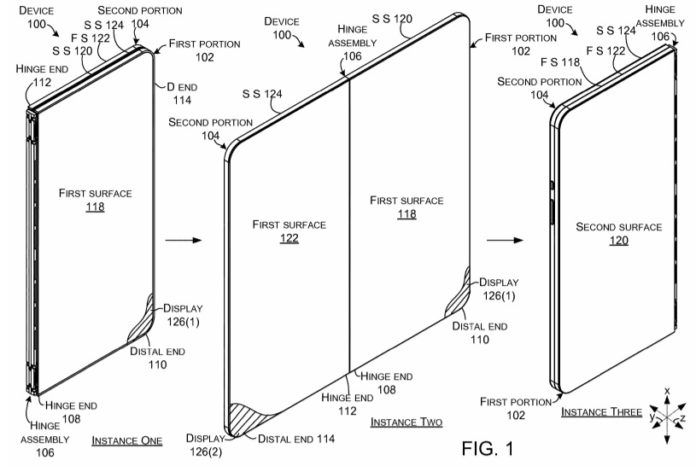 While Microsoft has been beaten to the folding screen market by Samsung and Huawei, the company has been developing its folding display tech for years. Whether that’s for the Surface Phone or a folding laptop remains to be seen, but a new patent points out how such a device would work with Windows 10.

The Microsoft Patent shows how a dual-screen device would interact with the platform. Microsoft describes a tablet-sized device with a book form factor featuring a hinge in the middle. Windows Latest reports the patent (titled “Hinge Device” was filed in 2015 but was only published on USPTO last week.

While other companies are exploring folding screens, Microsoft seems intent on a hinge assembly. Whether this will allow a singular screen experience when in tablet mode remains to be seen. Microsoft explains how the mechanism will allow users to easily switch forms of the device.

“The description relates to devices, such as computing devices that have hinged portions. One example can include a first portion and a second portion. This example can also include a hinge assembly and a magnetic assembly,” Microsoft explains.

Microsoft is working on a system for improving audio quality on augmented reality devices. The patent application describes a technique to boost audio performance by leveraging online searches for a digital audio waveform. 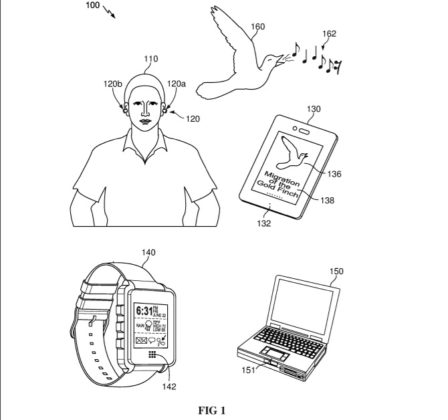 Discovered by Windows Latest, Microsoft filed the patent last year, but it was published to USPTO this week.

“Techniques for online information search and retrieval for a query including a digital audio waveform. In an aspect, an audio waveform is received and digitized by at least one of a plurality of audio input devices. The digitized audio waveforms are transmitted to a central processing unit, which formulates and submits a query to an online engine,” the patent explains.

“The formulated query may include at least one digital audio waveform. The online engine retrieves one or more online results relevant to the formulated query. The online results may include one or more relevant visual results, and/or one or more relevant audio results. The retrieved results are served in real-time back to a user, via a device having audio output capability, and/or a device having visual data output capability,” Microsoft continues.