For the unfamiliar, Rufus lets users quickly create a bootable USB, which can then be used to install Windows. With laptops and desktops shunning the disk drive, removable media has become the go-to way to install the OS.

To do so, software makes use of ISO files, which are virtual archives of an optical disk. In Rufus 3.5, you can choose to download rather than select an ISO. The app will give users the choice of several Windows 10 builds, going all the way back to 1507 for Windows 10. 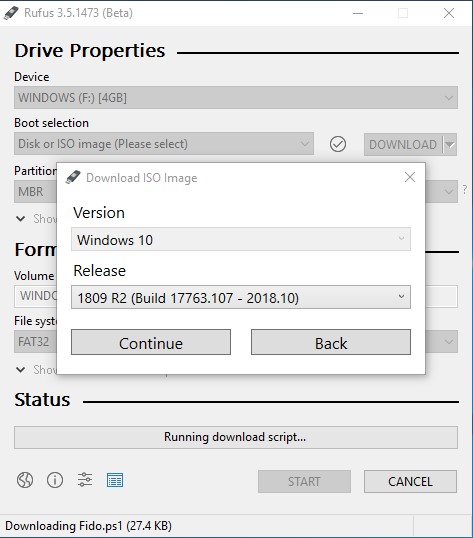 The Best Way to Install Windows?

As you’d expect, this is much more convenient than downloading it manually. Microsoft makes it quite difficult to get hold of Windows 10 ISO files, often requiring users to spoof their browser as a mobile device to download them directly.

The new build cuts out this annoyance while offering advantages over Microsoft’s offering. The Media Creation Tool forces users to re-download the entire Windows 10 install each time they want to burn it to a USB. Conversely, Rufus saves the file to the user’s system.

For now, Rufus 3.5 is only available in beta, which could come with some unintended bugs. However, it’s worth noting that Rufus’ functionality relies on an open-source PowerShell script to grab the builds. If you want easy access to the files, but not unstable software, you can just download that.