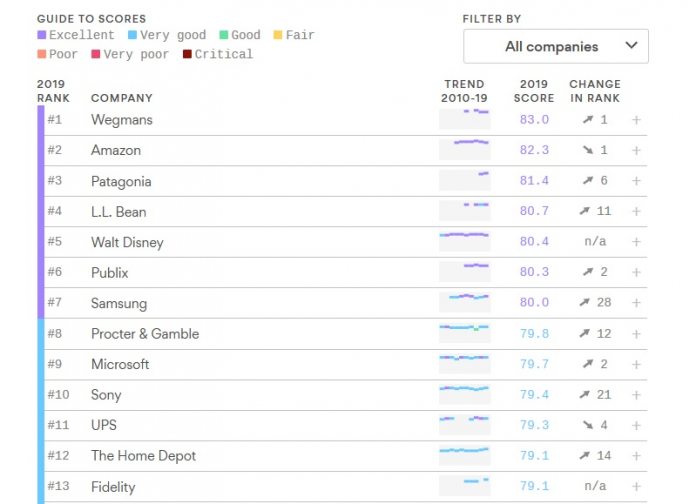 A new survey has sought to separate tech companies based on their reputation. The results show Amazon is the most reputable tech company, while Microsoft has also scored highly against rivals like Google and Apple.

Online retail and cloud service giant Amazon has not been without controversy. From criticisms over employee treatment to issues with bullying traditional retailers, the company has plenty of detractors. However, on the consumer side Amazon has worked hard to keep customers happy, such as ensuring goods are shipped quickly and accurately.

Keeping customers happy has resulted in the company being named most reputable by an Axios survey. Conducted on behalf of Axios by Harris Poll, the study happened over two stages. Firstly, over 6,000 adults in the United States were asked to list two companies with the worst and best reputations.

Wegmans (83.0) topped the poll, with Amazon (rating of 82.3) in second and Patagonia in third. It is worth noting Amazon was first in 2017, but still stays ahead in terms of tech companies. Samsung is the next tech giant in seventh place with a rating of 80.0.

Microsoft is doing well in 9th place with a 79.7 rating, a two-point increase compared to 2017. Some of the company’s rivals are lagging far behind. For example, Apple only ranks 32nd with a rating of 76.4 points. Google is paying the price for privacy concerns and only lands at 41 with a 75.4-point rating.

Interestingly, Amazon is not listed as a tech company in the study, instead falling under the “Others” category. That means (rather cheaply I admit), Samsung and Microsoft are the most reputable “tech” companies on the list.

Facebook’s 2018 full of scandals already handed the company the dubious award of most untrusted company. On the Axios poll, the social network recorded the biggest fall year-on-year. The company slipped 43 places to a lowly 94th and a rating of 54.1 for ethics and 56.0 points for character.