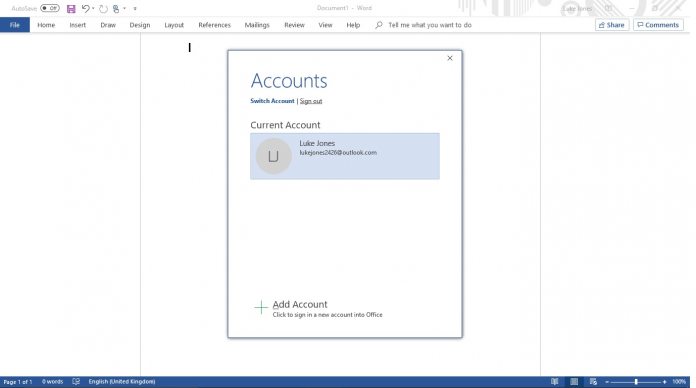 Microsoft has rolled out a recent update for Office Insider Program members. The latest release is available through the Fast Ring branch of the preview program for Windows 10. Leading the way with the update is the ability to switch seamlessly between different Office accounts.

A new account manager allows users to see all of their work and personal accounts through a single hub. This means the currently logged in account is visible, while other held accounts are listed byt offline.

Switching between accounts is now as easy as selecting between different accounts in the list. This includes the ability to seamlessly move between work and personal accounts without needing to sign out.

Microsoft says the ability is available to Insiders on Word, Excel, PowerPoint, OneNote, Project, Access, Publisher, and Visio. The new account manager is available from the name location in the top right corner of the app.

As usual, Microsoft wants feedback from Insiders on this feature to improve it before final release. As for that wider availability, we expect this to move swiftly through preview branches and be available to all Office users by the launch of Windows 10 April 2018 Update.

The new Office app essentially serves as a replacement of MyOffice, a native app that is pre-installed on Windows 10 builds. So, at its core the new PWA is Office.com in app form. Instead, the app works as a central hub for Office apps.

Here you can see things like contacts, recent documents, and more across Word, Excel, PowerPoint, OneDrive, Outlook, Teams, Yammer and other apps.