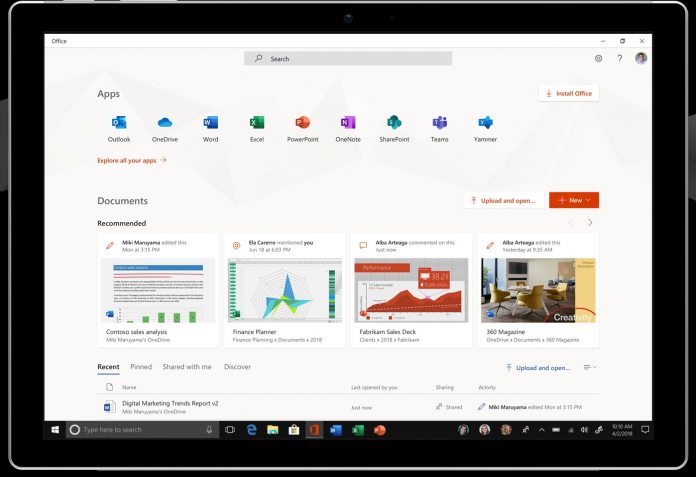 Microsoft has rolled out a new Office application for Windows 10. The app is the latest progressive web app (PWA) to be made available in the Microsoft Store as the company increasingly turns to the format.

The new Office app essentially serves as a replacement of MyOffice, a native app that is pre-installed on Windows 10 builds. So, at its core the new PWA is Office.com in app form. This means the individual Office apps like Word, PowerPoint, Excel are not here. However, those apps can be launched from within the hub.

Instead, the app works as a central hub for Office apps. Here you can see things like contacts, recent documents, and more across Word, Excel, PowerPoint, OneDrive, Outlook, Teams, Yammer and other apps.

The Office PWA will also function as an online/offline bridge. This means Windows 10 users can access Office desktop apps and web apps for Office Online. Locally stored cloud files can also be accessed through the hub.

Microsoft’s new PWA is available to anyone running Windows 10, but the company says the app was created with enterprise users in mind. For example, IT professionals can customize the app and place company branding within it.

As mentioned, MyOffice came pre-installed on Windows 10 machines. Most users did not remove it, so those with the app still present will see it automatically updated to the new Office PWA in the coming weeks.

For everyone else, the app can be found in the Microsoft Store here.

Furthermore, Microsoft has published a demo of the app in action, specifically focusing on its offline capabilities. You can check the demo out above.