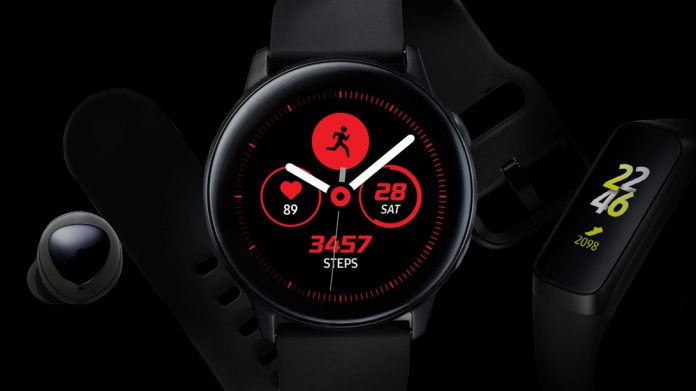 It hasn’t been the best few months for Samsung. Due to numerous leaks, we already know most of the details of the S10, S10 Plus, and S10 Lite. Last week, rumors circulated about a pair or Galaxy earbuds, and now Samsung’s entire wearables lineup has leaked.

This time, it was Samsung’s fault. SamCentral noticed an update to the Galaxy Wearables APK that included images of yet-to-be-released devices. They include official confirmation of the buds, a smartwatch, and a fitness tracker.

Little is known about the watches, but there are several rumors floating around about the Galaxy buds. They will allegedly be water resistant and could come with a charging case that can sit on the back of an S10 for power. Reportedly, they’ll use Bluetooth 5.0, have a 58 mAh battery, with 8 GB of onboard storage.

Samsung’s Fitness tracker will be known inventively as the Galaxy Fit, according to its own app. It features a slimmer, wristband design, displaying a digital time and step count on its face. There also appears to be a variant called the Fit e.

Meanwhile, the ‘Galaxy Watch Active’ will look a lot more traditional. It will feature a 40mm circular face with a hands-focused display. Unlike the previous Galaxy Watch, it doesn’t seem to have a rotatable bezel but does feature two bezels. It will have a heart rate sensor and step counter, with black and white variants.