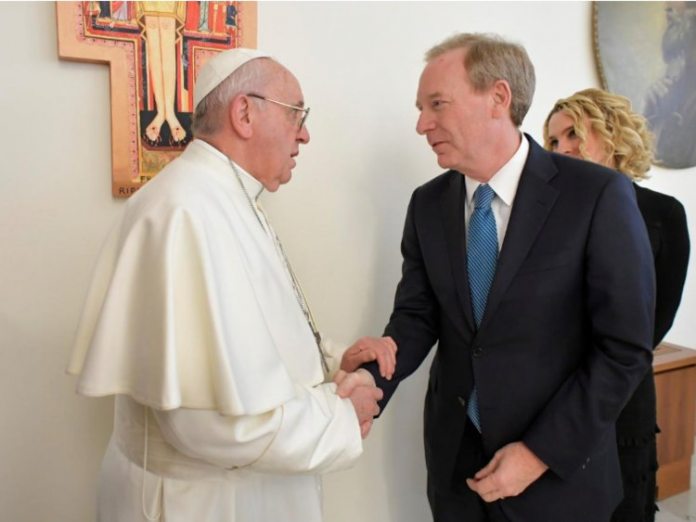 Microsoft President and chief lawyer Brad Smith has held a discussion with Pope Francis regarding the use of artificial intelligence (AI). Specifically, the Microsoft exec met the Catholic church leader to talk about ethics behind AI implementations.

During the meeting, Brad Smith and Pope Francis touched on how AI can be used to unite the digital divide between poor and wealthy countries.

In the past, 81-year old Pope Francis has admitted he is a “disaster” when it comes to technology. However, he spoke to Smith for around 30 minutes at his residence. In a statement, it was revealed the pair discussed:

“Artificial intelligence at the service of the common good and activities aimed at bridging the digital divide that still persists at the global level,” according to the statement.

Speaking to the Vatican newspaper L’Osservatore Romano, Smith said “strong ethical and new, evolved laws” are needed to ensure AI development is not used by bad actors. Vatican sources say its Academy for Life is working with Microsoft on a joint prize for the best doctoral dissertation written in 2019 on “artificial intelligence at the service of human life.”

Microsoft and other companies have pushed full steam ahead with AI development. The company has talked about the immense benefits artificial intelligence will have on everyday life in the near future. However, rarely are the dangers of AI discussed.

Just this week, Microsoft and Google both addressed the potential for AI to do their businesses harm. Both companies made the declaration in 10-K forms discovered by Wired. 10-K forms are standardized papers that organizations must file each year. Created for investors, the documents give an overview of business and finance performance.

For some insight on the broader dangers of AI, Elon Musk sat down with Joe Rogan last year and provided some sobering thoughts. Check out the video below.